A retired Major General is facing widespread ridicule after he shared a video of Apache helicopters flying over a lake in the US claiming them to be Indians over Pangong Tso lake in Ladakh. Brajesh Kumar, who identifies himself as a Major General (retired), has refused to take down the fake video even after scores of Twitterati called him out for peddling fake news. His determination to defend fake news has prompted to question his elevation in the Indian army to the post of Major General, which is just two ranks short of the Indian Army Chief. 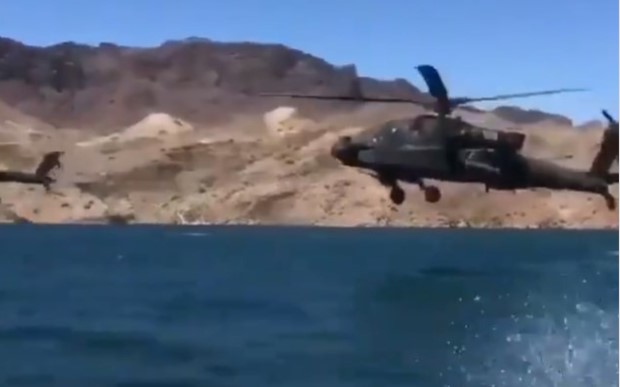 Sharing the video, Kumar wrote, “Superb…Our Apache attack helicopters patrol over Pangong Tso in Ladakh ???? Appreciate.” In the video, at least three Apache helicopters could be seen flying low over a water body with a hill range prominently visible in the background. No sooner did he share the video, many took to Twitter to point out that the video in question was a US lake.

One user Ashish Singh wrote, “It’s Lake Havasu, Arizona.” Another retired Indian Air Force veteran wrote, “These are not IAF Helicopters. This video is viral on WhatsApp too but not true.” Brigadier (Retired) RS Pathania wrote, “I doubt it’s genuine. In the 12th second there is a woman’s voice in a foreign language. I’d also got this video this morning on whatsapp.”

One user also shared a similar video from the Lake Havasu in the US showing a group of Apache helicopters hovering over the Arizona lake. The YouTube video in question was uploaded in 2018.

Faced with widespread condemnation, fake news peddler Brajesh Kumar said conceded his mistake but refused to take down the misleading video saying that this was but ‘Feel Good Factor’ and ‘a force multiplier.’

Many questioned his credentials as a Major General. One wrote, “May be an imposter account of Major General.” Another wrote, “Chavvni chaap “major general” … aa jatey hain kahan se.” “He is worse than IT Cell. Denigrating the reputation of Army. He is deliberately lying so that he can feel good,” commented another.

You are a Maj Gen Mr Brajesh !!

It is not Pangong Tso but Hoover Dam in the USA ??

Why are you uploading the Whatsapp forwards of the Bhakths ??? https://t.co/AQFj52y0si