Madhya Pradesh Congress’ Working President Jitu Patwari has landed himself in a spot of bother for tweeting a morphed image of Prime Minister Narendra Modi. A case has been filed at the Chhatripura police station under sections 188 (disobedience to order duly issued by public servant) and 464 (making false electronic record) of IPC on the complaint of city BJP president Gaurav Randive. 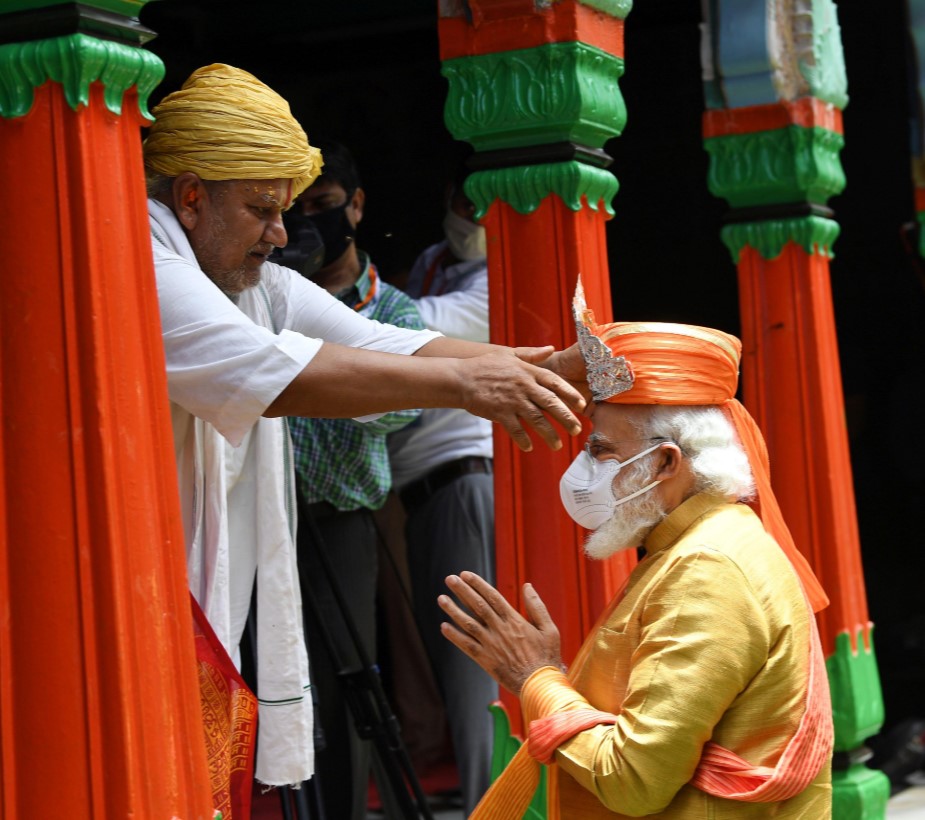 The ruling BJP in Madhya Pradesh, according to news agency PTI, alleged that Patwari had hurt the dignity of the PM as well as religious sentiments of Hindus.

The photo uploaded by Patwari, now deleted, had shown Modi seated in Ayodhya during the foundation laying ceremony of the Ram Temple on 5 August. Modi was shown to be holding an empty bowl while wearing a mask.

Patwari’s tweet in Hindi read, “The country’s economy, business and income, declining economic status of farmers, jobs and unemployment, decline of economy, labourers and their struggle. These are not subjects of television debate. Because, (we) will walk with the bowl.” 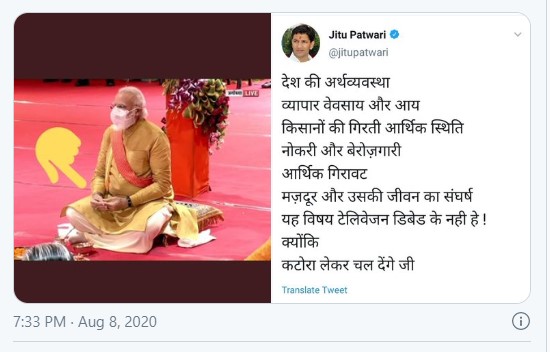 Several Congress leaders including Rajya Sabha MP Digvijay Singh have come in defence of Patwari and likened the police action to an attack on free speech.

17:13 PM– #Police have detained three accused for the abduction and gang rape of a 17-year-old specially-abled girl in Dausa district of #Rajasthan. She was kidnapped on her way to a store near her home and then assaulted. (IANS)

16:21 PM– Shah Faesal, who resigned from IAS, steps down as president of Jammu and Kashmir People’s Movement. (PTI)

16:05 PM– #UttarPradesh: A six-year-old girl, who was kidnapped and brutally raped in #Hapur district on Thursday (August 6), remains in a critical condition even as the police continue to hunt for the accused. (IANS)

14:56 PM– At least 2 persons killed, 3 injured in major fire that gutted some shops, houses and godowns on busy AT Road in #Jorhat city of Assam: Officials. (PTI)

14:16 PM– The death of 11 persons of a family in Dechu, Jodhpur is very sad and unfortunate. May their souls rest in peace. There will be a thorough investigation in the incident: Rajasthan Chief Minister Ashok Gehlot

The death of 11 persons of a family in Dechu, Jodhpur is very sad and unfortunate. May their souls rest in peace. There will be a thorough investigation in the incident.

On a visit to the hospital for a separate procedure, I have tested positive for COVID19 today.
I request the people who came in contact with me in the last week, to please self isolate and get tested for COVID-19. #CitizenMukherjee

12:38 PM– The All India Bank Employees Association has expressed its opposition to the appointment of #ICICIBank‘s former CEO and non Executive Chairman K.V.Kamath as the Head of the Expert Committee on Resolution Framework for #Covid19-related Stress as his name figures in a #CBI FIR. (IANS)

12:08 PM– In one of the biggest narcotics haul in #Mumbai, the Mumbai Customs and Department of Revenue Intelligence (DRI) have seized 191 kg of heroin worth around Rs 1,000 crore from a cargo container at Nhava Sheva Port Trust, officials said on Monday. (IANS)

11:53 AM– A five-year-old boy, who was kidnapped from #UttarPradesh’s #Moradabad district, was found abandoned in a bus in #Ghaziabad. UPSRTC driver Vikal & conductor Deepak found the abandoned boy crying in the bus,which was on its way to Moradabad via Ghaziabad from Greater Noida depot. (IANS)

10:33 AM– A 22-year-old woman committed suicide in #UttarPradesh’s Jalaun after she was allegedly beaten up by a police inspector. The incident took place in Naya Ramnagar area. The deceased, Nishu Chaudhary, was found hanging by a noose at her house on Saturday. (IANS)

09:58 AM– Former IAS officer turned politician, #ShahFaesal is likely to join back administration after he was conveyed by authorities that his resignation has not still been accepted, top sources said. (IANS)

09:23 AM– BJP worker, who was shot at by militants in J&K’s Budgam district, succumbs to injuries: Police. (PTI)

08:43 AM– Eight persons including six #French tourists and two #Nigeriens — a guide and a driver, have been killed by gunmen in Niger’s Koure area, the Nigerien ministry of interior and public security said. (IANS)

06:53 AM– Miscreants allegedly beat up & open fire on an advocate in Dhoomanganj area last night. ADG Prem Prakash says, “The bullet missed the advocate. It has been alleged that the miscreants are members of criminal Atiq Ahmad’s gang. Police are searching for them.” (ANI)