The number of people dying of COVID-19 across the globe has crossed one million mark with the US, Brazil and India reporting half of the total number of deaths.

According to Johns Hopkins University, the number of deaths due to COVID-19 across the world now stands at 1,000,555.

Experts believe that the actual number could be significantly higher as many countries are not reporting the true figure related to the COVID-19 deaths.

The pandemic, which was first reported in Wuhan in China nearly 10 months ago, continues to wreak havoc in several parts of the world including India.

In other news, the Bengaluru Police has launched an investigation against officials of a private TV channel, which recently broadcast a sting operation alleging the involvement of members of Chief Minister BS Yediyurappa’s family in acts of corruption.

A report by Indian Express said that police carried out searches at the offices of Power TV and the home of its managing director-editor Rakesh Shetty, and also questioned an anchor.

18:18 PM: ‘Class-specific jungle raj’ of UP has killed another young woman: Congress leader Rahul Gandhi hits out at state govt over death of Dalit woman who was gang-raped in #Hathras district. (PTI)

17:46 PM: EC says bypolls to 1 Lok Sabha, 56 assembly seats will be held on November 3, 7; decides not to hold ‘at this stage’ by-elections to 7 assembly seats across Kerala, Tamil Nadu, Assam & West Bengal. (PTI) 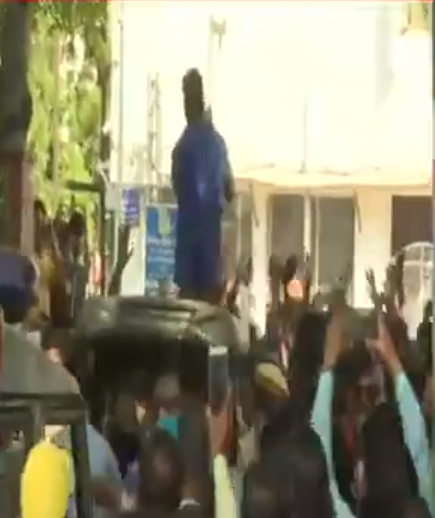 15:58 PM: No hope is left from the present insensitive govt: Samajwadi Party leader Akhilesh Yadav on death of Dalit woman who was gang-raped in UP’s #Hathras district. (PTI)

15:03 PM: There’s no difference between GST, noteban & 3 farm laws. Only difference is that this is directly ‘stabbing your heart with a knife’: Congress leader Rahul Gandhi during virtual meet with group of farmers. (PTI)

13:56 PM: Actor turned politician and #DMDK founder #AVijayakant was asymptomatic to #coronavirus infection and stable even as his wife V Premalatha was admitted on Tuesday in hospital a day after testing positive, MIOT International said. (IANS)

11:57 AM: Some people are opposing farm reform bills as yet another source of earning black money has been closed for them: PM Modi. (PTI)

10:48 AM: A 19-year-old woman who was gang-raped and assaulted in Hathras of Uttar Pradesh, passes away at a hospital in Delhi, confirms her brother. The woman was gang raped in Hathras on 14th September, 2020. (ANI)

06:30 AM: A report by the New York Times sensationally reports that US President Donald Trump paid only $750 in federal income tax in both 2016 and 2017 despite earning millions of dollars. Nancy Pelosi, Speaker of the House of Representatives, has said that the revelation on the tax avoidance by Trump was a national security issue. Pelosi told NBC that the report showed that “this president appears to have over $400m in debt”. Trump has called the revelation ‘fake news.’