Congress MP Shashi Tharoor has been forced to issue an extraordinary clarification amidst widespread condemnation for his decision to praise BJP MP Tejasvi Surya even after the latter displayed Islamophobia. 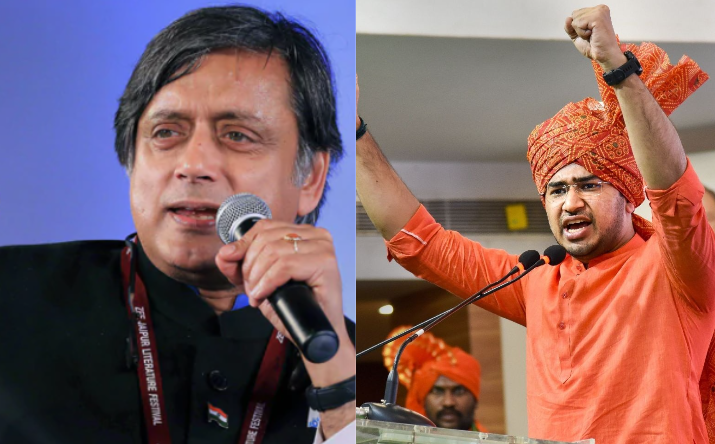 Far from condemning Surya’s Islamophobic act, Tharoor had tweeted calling the BJP MP ‘smart, passionate & talented’ individual. “My young colleague @Tejasvi_Surya is smart, passionate & talented. But i urge him to avoid this kind of behaviour. Humanitarian needs must prevail over communal politics. Unity across political & religious lines is indispensable when lives are at stake,” the Congress MP had tweeted.

This evoked angry reactions from many, who began to condemn the Congress politician with many even accusing of normalising fascism.

When India needs to fight COVID unitedly, his focus is on dividing Indians.

He is as bigoted as they come. Let’s not normalise Fascists.

Just because he is fluent in English doesn’t mean he is smart, passionate and talented. Disappointing from Mr. Tharoor. https://t.co/FFmAgNrOc0

Faced with widespread criticism, Tharoor posted a series of tweets to clarify his stand. He wrote, “The words I used to describe a LokSabha colleague have genuinely upset a lot of people, including some who’ve been my well-wishers. Like you, I disapprove of his recent & past actions. It was out of solidarity w/the 17 youth who unjustly were affected that I tweeted at all.”

He continued, ” I know @Tejasvi_Surya as a member of the parliamentary committee I chair, & see qualities that I felt could be put to better use than to stoke communalism. In the present inflamed environment, I regret that my message got lost in your outrage.”

“A spoonful of sugar makes the medicine go down”, goes the saying: I see many of my friends spat out the sugar & ignored the medicine. I understand you felt my “sugarcoating” mollycoddled the offender & normalised his inexcusable conduct. That wasn’t my intention,” Tharoor added.

He concluded, “That’s why I’m issuing this statement to clarify my position. Unlike most of my critics, I need to continue to work with MPs of different parties, &convictions opposed to mine, in the LokSabha. But I agree fully with my critics – there is NO space for normalising bigotry. END”

4/4 That’s why I’m issuing this statement to clarify my position. Unlike most of my critics, I need to continue to work with MPs of different parties, &convictions opposed to mine, in the LokSabha. But I agree fully with my critics – there is NO space for normalising bigotry. END

Popular actor Siddharth had called Tejasvi Surya ‘far more dangerous’ than even terrorist Ajmal Kasab after the BJP MP from Bengaluru was found to be peddling Islamophobia amidst a deadly pandemic. Surya had to face flak after he was seen slamming Bengaluru civic body officials for hiring more than a dozen Muslims as COVID warriors.