Delhi Chief Minister Arvind Kejriwal On Friday told Prime Minister Narendra Modi that he was capable of using abusive languages but his faith as Hindu did not allow him to match the level of saffron party supporters. 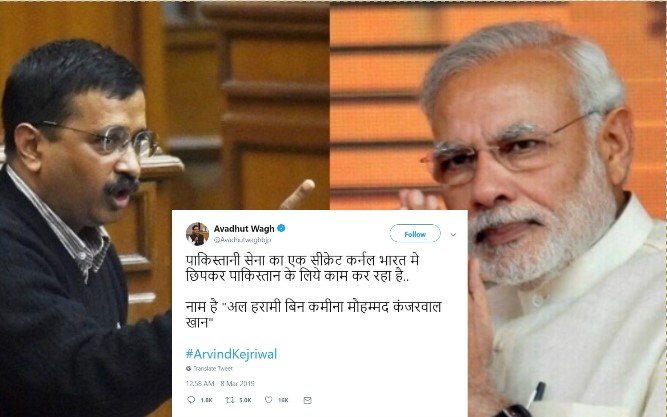 Kejriwal wrote, “Mr Prime Minister, You follow this man on Twitter. He’s your disciple and an office-bearer of the BJP. We are also capable of using abusive language but we are Hindus. Our Hindu civilisation doesn’t teach us to abuse others.” Kejriwal also tagged Modi in his tweet.

This was after a BJP spokesperson, Avduth Wagh, posted a tweet using expletives for Kejriwal calling him an agent of Pakistan. Wagh had written, “A Pakistani army’s colonel is secretly working in India for Pakistan.” The concluding part of his tweet had the Delhi chief minister’s name twisted by using plenty of expletives.

His abusive tweet was liked by 16,000 BJP supporters with 5,000 of them sharing it on their timelines. Wagh earned considerable flak from many social media users for his abusive tweet.

Last week, Kejriwal had lashed out at Modi after his government’s Attorney General sensationally told the Supreme Court that documents related to the Rafale deal had been stolen from the defence ministry.

Terming the development serious, Kejriwal tweeted, “This means that Modi jis has committed a theft. Now he has got the entire set of documents stolen. If he had committed a theft, where was the need to have documents disappeared? A prime minister, who masterminds stealing of documents related to the armed forces is very dangerous to the country.’