The Uttar Pradesh Police have reportedly arrested a freelance journalist after he tweeted on the video of a woman, who claimed to have been in a relationship with Chief Minister Yogi Adityanath. 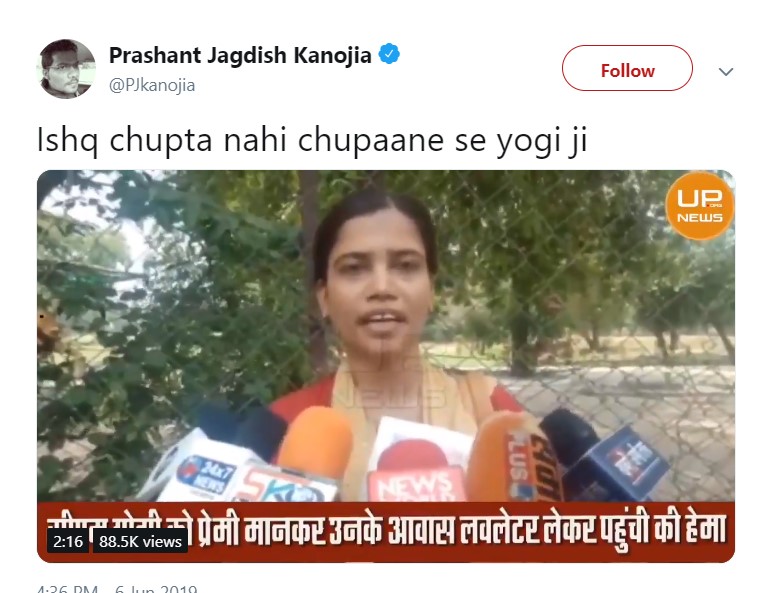 Kanojia had commented on a video of a woman, who claimed to have been in a relationship with Adityanath for over a year. While sharing the video, Kanojia had written, “Ishq chupta nahi chupaane se yogi ji (Love can’t be kept in secret however much you try Yogi ji).” The video of the woman making astonishing claims was widely shared on social media.

Kanojia’s arrest has left journalists shocked evoking angry reactions. Journalist Siddharth Varadarajan wrote on Twitter, “Yes, Prashant Kanojia (@PJkanojia) has been arrested. Picked up by UP police in a shocking abuse of law and attack on free speech rights. He used to be a reporter for @thewirehindi, but is now a freelancer. Arrest shows the fate of rule of law in @myogiadityanath’s jungle raj.”

Journalist Kunal Majumdar tweeted, “According to Amar Ujala, Lucknow Police has issued a warrant to arrest Prashant Kanojia for a social media post on UP CM. Journalist Utpal Pathak tells me Kanojia was arrested today by UP cyber cell based on an FIR lodged by sub-inspector Vikas Kumar at Hajratganj police station.”