The Indian army has succumbed to criticism from a known Hindutva hatemonger as it moved with lightning speed to delete a photo of its iftar party with Muslims in Jammu and Kashmir during the Holy month of Ramadan. 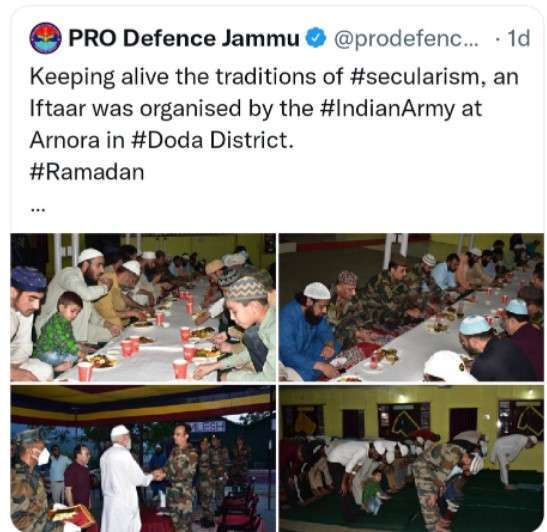 On 21 April, the official Twitter handle of the Indian Defence PRO of Jammu had tweeted a series of photos from Iftar as it wrote, “Keeping alive the traditions of secularism, an Iftaar was organised by the Indian Army at Arnora in Doda district.”

In the photos shared by the Defence PRO, a group of Indian army personnel could be seen sharing iftar with Muslims.

However, the gesture of harmony and secularism did not go down with a known Hindutva hatemonger. Rape-accused editor of Sudarshan TV, Suresh Chavhanke, shared the Defence PRO’s tweet and wrote, “Ab ye bimari bhartiy sena mein bhi ghus gayi hai. dukhad. (This disease has not infiltrated even in the Indian army. Sad.).”

Rattled by the criticism of a known Hindutva hatemonger, the Defence PRO decided to delete the tweet of harmony and peace. The decision evoked angry reactions from ex-servicemen.

Maj Gen (Retired) Yash Mor tweet, “Indian Army has been at the forefront of interfaith harmony. We as officer’s take pride in the fact that we have NO religion, we just adopt the religion of the troops we command!”

Indian Army has been at the forefront of interfaith harmony.
We as officer's take pride in the fact that we have NO religion, we just adopt the religion of the troops we command! https://t.co/7nUSPapgq9

Lt. Gen (Retired) HS Panag was quoted by Indian Express as saying, “The concerned PRO and the Army should have had the guts to defend the tradition of holding iftar during Ramzan. There is nothing wrong in it.”

Similar reactions followed from others.

The Army has not dared to contradict this hate mongering tweet.
That tells us a lot. pic.twitter.com/pVEHW8NAdf

Defence PRO deleted the tweet. It's a big statement

Unfortunate that army couldn't stand up to a goon. https://t.co/rVBBx6f096