India has reacted angrily after an Australian news website carried a hard-hitting report on the latest wave of the pandemic and blamed Prime Minister Narendra Modi for the widespread deaths across the country. The headline by the news website The Australian had screamed, “Modi leads India into viral apocalypse.” 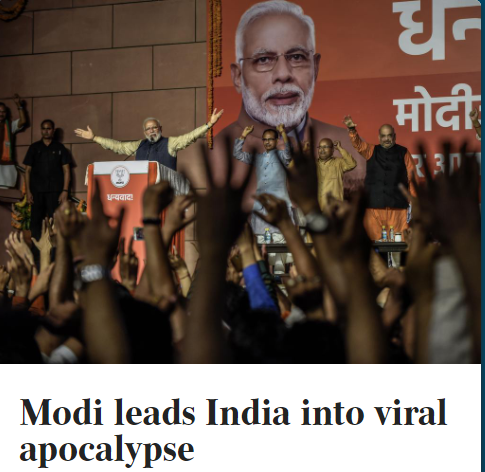 Mincing no words, the news report by The Australian had said, “Arrogance, hyper-nationalism and bureaucratic incompetence have combined to create a crisis of epic proportions, critics say, as India’s crowd-loving PM basks while citizens literally suffocate.”

Reacting angrily to the publication of the report, the Indian high commission in Australia, released a statement warning the website that it should ‘refrain from publishing such baseless articles’ in the future.

It tweeted, “Urge @australian to publish the rejoinder to set the record straight on the covid management in India and also refrain from publishing such baseless articles in future.”

Urge @australian to publish the rejoinder to set the record straight on the covid management in India and also refrain from publishing such baseless articles in future. @cgisydney @CGIPerth @cgimelbourne @MEAIndia https://t.co/4Z3Mk6ru3W pic.twitter.com/4bgWYnKDlB

The statement by the Indian high commission said, “It is astonishing to see that your respected publication has chosen to reproduce a completely baseless, malicious and slanderous article without bothering to check the facts of the case with any authorities in the Government of India.”

Demanding that its statement be published by The Australian, the Indian high commission said, “Coverage of such motivated and malicious reports in your publication only helps in spreading falsehoods and undermining humanity’s common fight against the pandemic…I hope you will publish this rejoinder to set the records straight and also refrain from publishing such baseless articles in future.”

Scores of people have been dying every day for the want of liquid oxygen as hospitals struggled to cope with the flow of COVID-19 patients. The latest of pandemic has brutally exposed India’s poor healthcare system. PM Modi and his government have been facing flak for their arrogance as he continued to attend huge election rallies in violation of COVID-19 protocol even when India reported thousands of deaths every day.