Eoin Morgan on Monday played the skipper’s knock to guide Kolkata Knight Riders to a 5-wicket win against Punjab Kings in an IPL match. 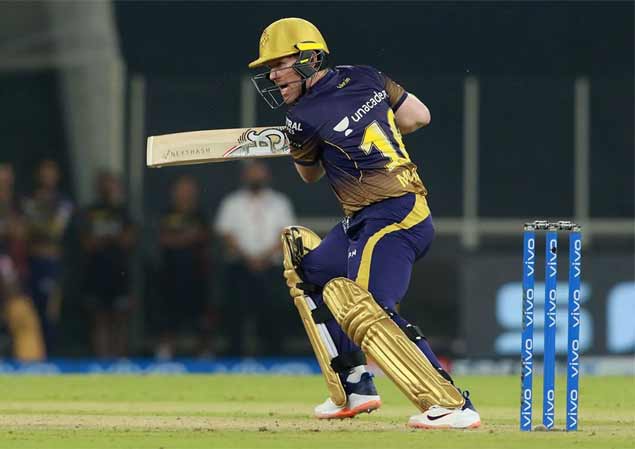 Batting first, Punjab Kings could only score 123-9 in 20 overs Mayank Agarwal emerging as the top scorer. He made 31 runs, while Chris Jordan contributed with 30 runs.

Prasidh Krishna picked up three wickets, while Pat Cummins and Sunil Narine shared two wickets each. Cummins had earlier dominated news coverage in India after he donated $50,000 to PM Cares Fund towards the purchase of oxygen supplies amidst the raging pandemic.

The run chase by the KKR started on a promising note but the side led by Eoin Morgan kept losing wickets at a regular interval. It appeared that they would once again squander a chance to win the match. But Morgan remained steadfast from his end and subsequently led his team to an easy win. Morgan remained unbeaten at 47. Rahul Tripathi made 41 in 32 balls before he threw away his wicket when there was no requirement to go for the maximum.

The KKR were scoring nearly eight-run an over when Tripathi decided to go for the six. But he was caught at the boundary by Shahrukh Khan off Deepak Hooda’s bowling.

With tonight’s win in Ahmedabad, the KKR has climbed to the fifth position, while Punjab Kings has been pushed to the sixth on the points table.

Reacting to his side’s loss, Punjab skipper KL Rahul said, “I really don’t know what to say, it was a poor performance from us. We should have adapted better on a new pitch, we could have applied a lot more with the bat and get that extra 20-30 runs. The wicket was a bit low and slow, but 120-130 was not enough. A few soft dismissals are that’s costing us the game. The pitch was a bit two-paced and stayed up and down as well. It was hard in the first six overs to understand the good shots to play on this pitch. It was expected that the pitch was difficult to assess at a new venue when you’re batting first, but we should have assessed and adapted quickly but we couldn’t do that. We have a few more games here and we hope to learn from our mistakes. That was a stunning catch from Bishnoi, we’ve been a good fielding side. We have Jonty Rhodes who pushes the boys at every training session. He’s a tough task master and he puts everyone to test. He has a great energy off the field and that rubs off on the players.”

Morgan, for his part, said,  “Nice to lead the team. We’ve worked incredibly hard, but didn’t perform as well as we would have liked initially. Today our performance was really, really impressive, especially from our bowlers and the way we started and kept the pressure throughout. On a wicket like that, in 12th or 13th over the ball continued to slide on and got better and better. Mavi was only in his second game this season, and bowling four together is something we don’t do this often. His match-up against Gayle was favourable. He had started well last game so huge credit to him.”

Morgan was declared Man Of The Match for his impressive batting and heroic efforts in the field. He took three catches in the match.