A group of tourists from Haryana are facing widespread condemnation on social media after a video of them driving their Audi through Ladakh’s Pangong Lake went viral. They are being branded as ‘hooligans from Haryana’ because of their reported roots in Haryana. 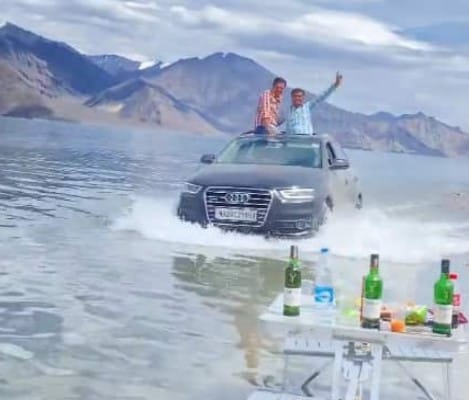 In the viral video, three tourists could be seen driving their Audi through Pangong Tso lake e in Ladakh in the backdrop of an old Bollywood track. Alcohol bottles could be seen placed on a foldable picnic table.

No sooner did the video of these tourists emerge than netizens reacted angrily with many slamming them for destroying the ecology. Many were quick to establish their identity by concluding that they hailed from Haryana.

So this lowlife from Sonipat, Haryana desecrates the ecologically sensitive Pangong lake in #Ladakh

Singlehandedly defaming all Haryanvis. Drinks, drives —and flaunts it

HOOLIGANS FROM HARYANA DRIVE THROUGH #PangongLake
A video shows 3 animals from #Haryana in an Audi on the Ladakh lake with 2 two of them yelling out of the sunroof & the driver smiling. The video also shows foldable chairs, a table with alcohol bottles, water & packets of chips. pic.twitter.com/T78hlOtPAG

These Peoples Are Bad, Police Should Punish Them. But Don't Blame Entire Haryana For Their Behavior. They Are Not Representing HR. This Incident On Pangong Lake, Ladakh Is Punishable.#Ladakh pic.twitter.com/o2IxoQFfGJ

I am sharing again an another shameful video . Such irresponsible tourists are killing ladakh . Do you know? Ladakh have a more than 350 birds species and lakes like pangong are the home of many bird species. Such act may have risked the habitat of many bird species. pic.twitter.com/ZuSExXovjp

There are no reports of police taking any action against the men seen in the viral video.