Police in Bengaluru on Thursday dragged and detained historian Ramachandra Guha while he spoke to a journalist on LIVE TV in the state capital of Karnataka while staging a peaceful protest against the amended Citizenship Act. 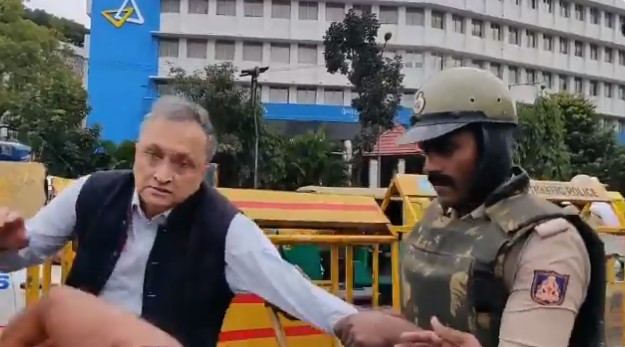 Guha was speaking to NDTV when a group of police personnel arrived and held him by his arm and dragged him away. “The government in Delhi is giving orders to police here to shoo us away. We are protesting non-violently. This is a discriminatory act by the central government. See what’s happening. What kind of action is this by the police?”

Even before he could reply to a question on his future course of action, policemen grabbed the noted historian’s hand and dragged him away. Guha was among a group of other protesters that the Bengaluru Police detained at the city’s Town Hall.

“I have been detained by police for holding a poster of Gandhi and speaking about the constitution to the press,” Ramchandra Guha was later quoted by NDTV.

Industrialist Kiran Mazumdar Shaw tweeted, “This is shocking n reflects the total lack of understanding of fundamental freedom to express dissent – a peaceful protest shd not be mishandled in this manner.”

https://t.co/kQpbEkDqbt This is shocking n reflects the total lack of understanding of fundamental freedom to express dissent – a peaceful protest shd not be mishandled in this manner

Citizens and members of civil society across India are staging nationwide protests against the enactment of the anti-Muslim Citizenship Act, which provides automatic citizenship to every illegal non-Muslim living in India. Experts say that the Act in combination with the imminent NRC has been passed to declare legitimate Muslim citizens of India stateless in the time to come.