Hours after the last phase of Lok Sabha polls concluded, several visuals of suspicious movements of vehicles full of EVMs have cause widespread panic among non-BJP parties. Taking to Twitter, Bihar’s Rashtriya Janata Dal wrote that RJD and Congress workers had prevented a van from entering a strongroom while carrying countless number of EVMs. 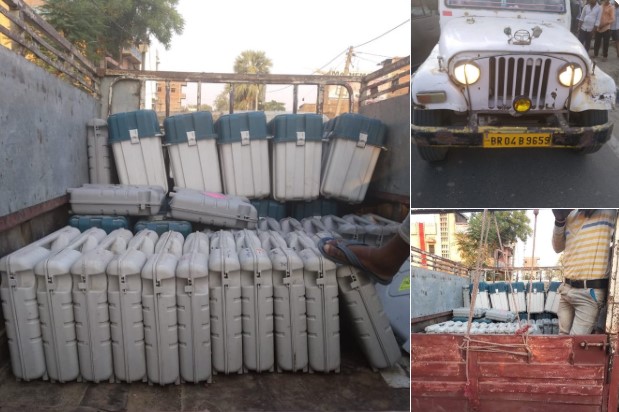 The tweet by the RJD read, “Right now, RJD-Congress workers have stopped a vehicle carrying EVMs after it was found to be wandering around a strongroom in the Saran and Maharajganj Lok Sabha constituency. Local Block Development Officer was also present there but he had no answer to provide. The question is bound to arise. What kind of game is being played by the Chhapra district administration?”

This followed another shocking video from Uttar Pradesh’s Chandauli, where a woman had alleged that someone had applied the voting ink on her finger by paying Rs 500. She was asked to not turn up at the polling station to cast her vote.

In Chandauli, there were also reports that EVMs had been replaced. The SP-BSP candidate from Mirzapur, Afzal Ansari, reportedly reached the spot and launched a protest in front of the strongroom at Mandi Gate. Afzal Ansari, who arrived in Jangipur Mandi late Monday evening, has also alleged that there could be EVM tampering in this region too. Ansari and his supporters, who sat on protest, alleged that there was an attempt to transport EVMs out of the strongroom.

Similar suspicious movement of vehicle carrying EVMs was also reported from Haryana’s Fatehabad. Haryana Congress President Ashok Tanwar shared a video, which showed a truck carrying EVMs near a strongroom. The voice-over in the video report said that the truck full of EVMs had entered the Government Girls College Bhuriyakhera in Fatehabad of Haryana, where EVMs were kept in a strong room. Tanwar, according to the report, was alerted by Congress workers and the truck was made to return.

Not too along ago, a video of a local polling agent pressing the EVM button on behalf of women voters in Haryana’s Faridabad Lok Sabha seat had gone viral. An embarrassed Election Commission was forced to arrest the individual and order a repoll.

Earlier similar suspicious movements of vehicles carrying EVMs were found in Amethi and Domariyaganj. In Sambhal, the seal of the strongroom was found to be broken after the poll. When questioned, local EC officials had made a bizarre claim that the seal needed to broken to shoo away a parrot that had entered the strongroom.

The recent suspicious development surrounding EVMs comes just a day after exit polls gave a landslide victory to the BJP-led NDA. Some exit polls had predicted Modi’s win to be even bigger than the 2014.

Immediately after the exit poll results were made public, West Bengal Chief Minister Mamata Banerjee had tweeted saying that the purpose of such overwhelming exit polls in favour of the BJP was to manipulate the outcome by replacing EVMs in strongrooms, where machines are kept after the polling is over.

Meanwhile, AICC General Secretary Priyanka Gandhi Vadra has issued an audio appeal to Congress workers asking them to not pay heed to ‘rumours and exit poll predictions.’ Priyanka Gandhi Vadra was heard saying in the audio appeal, “This is being done to break your morale. This now becomes even more important for you to stay cautious. Stay put and alert at counting centres. I am pretty sure that the hard work put in by us will bear fruits.”

Not too long ago, Janta Ka Reporter reported (watch above) how RTI replies obtained by a Mumbai-based activist Manoranjan Roy had revealed that nearly 20 lakh EVMs had gone missing and the national poll body had no clue about it. The ECI had later bullied Twitter India to remove the video blog of Janta Ka Reporter founder Rifat Jawaid. Janta Ka Reporter has decided to file a case against both the Election Commission and Twitter India.

As the videos went viral causing embarrassment to the national poll body, the EC issued several clarification denying the reports of wrongdoings.

Saran Bihar, where Candidate agent has expressed satisfaction over the complete process being transparent and followed by the officials as per the guidelines. @DDNewsLive @airnewsalerts @PIB_India @ECISVEEP pic.twitter.com/8BVJouJaLO