At least four people including a head constable of the Delhi Police were killed on Monday after violence gained momentum in India’s national capital. The head constable has been identified as Rattan Lal. One of the civilians killed by the Hindutva mob has been identified as Mohammad Furqan. Visuals of Furqan being lynched in broad daylight have gone viral on social media platforms. 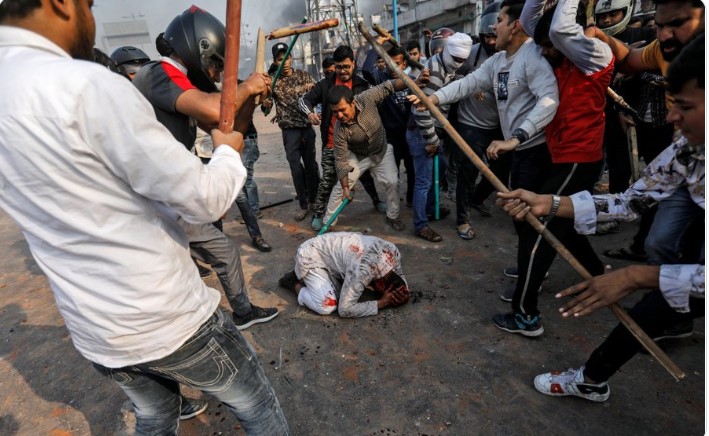 The serious law and order issue plagued Delhi soon after BJP leader Kapil Mishra issued chilling threats in the presence of a senior police officer. He had threatened to take law into his own hand if anti-CAA protesters were not removed from Delhi’s streets.

Earlier in the day, a video of a man brandishing pistol and firing in the presence of a cop had surfaced on social media. The man dressed in a red shirt was seen firing indiscriminately even as the cop looked on. Social media users have been sharing his close-up photo urging the cops to identify and arrest the man.

Here is a closer shot of the man who fired 8 rounds in North East Delhi today with absolute impunity. Identify this man. Lock him up #DelhiViolence pic.twitter.com/Q7rMI9YQaA

Several videos of violence plaguing a large part of north-east Delhi are being shared on Twitter. In one particular video from Gokulpuri, a tyre market could be seen set on fire. Similar videos of vehicles, shops and buildings being set ablaze too emerged from other areas such Bhajanpura, Maujpur and Jaffrabad. According to some reports, a petrol pump was set on fire in Bhajanpura after a violent mob hurled petrol bombs.

Delhi Chief Minister Arvind Kejriwal, who came under fire for his silence, took to Twitter to write, “Very distressing news regarding disturbance of peace and harmony in parts of Delhi coming in. I sincerely urge Hon’ble LG n Hon’ble Union Home Minister to restore law and order n ensure that peace and harmony is maintained. Nobody should be allowed to orchestrate flagrations (sic).”

Delhi LG Anil Baijal tweeted, “Instructed @DelhiPolice and @CPDelhi to ensure that law and order is maintained in North East Delhi. The situation is being closely monitored. I urge everyone to exercise restraint for maintenance of peace and harmony.”

The Delhi government has ordered schools in north-east Delhi to remain shut on Tuesday in view of the serious law and order issue arising out of the two days of violence. The Delhi Police have imposed Section 144 in large parts of northeast Delhi. The central government has also deployed paramilitary forces in the violence-torn areas.

Meanwhile, US President Donald Trump arrived in Delhi for the last leg of his two-day India visit with his wife Melania Trump.