The government-owned broadcaster All India Radio on Saturday faced condemnation after activist Saket Gokhale highlighted how it had used Prime Minister Narendra Modi’s photo in its news flash on the death of Swami Adhyatmananda. 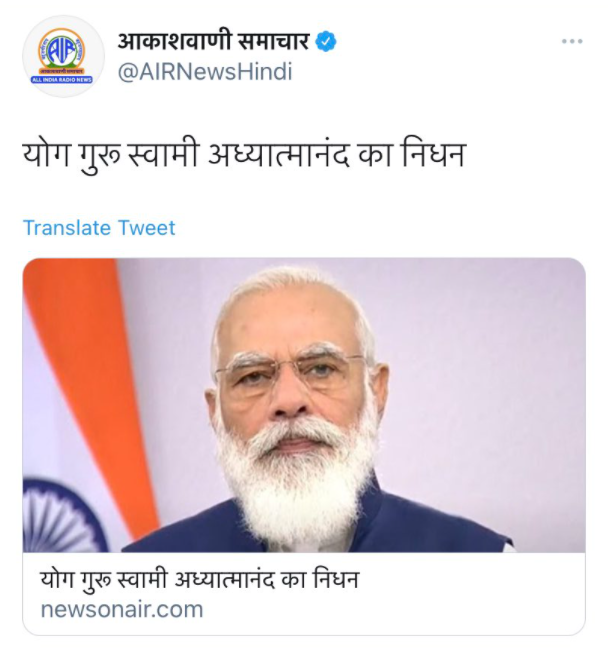 However, netizens have been targeting the AIR for its mistake. Activist Saket Gokhale wrote, “BJP IT cell got briefly infiltrated this afternoon. If it’s not that, thoughts & prayers for whichever sanghi posted this from @AIRNewsHindi.” Gokhale said in his subsequent tweet that he had archived the tweet in the event that the Information and Broadcasting Minister Prakash Javdekar issued a denial later.

“And tweet archived in case @PrakashJavdekar decides to become Savarkar as always,” he tweeted.

And tweet archived in case @PrakashJavdekar decides to become Savarkar as always:https://t.co/k5QCf8F3VN

Twitter user Deependra wrote, “Looks like aakashvani is taking drugs nowadays!” Sanjeev Srivastava wrote, “Oh No No, The person in the picture.” Several users asked if the person handling the AIR Twitter page was consuming drugs. “Sometimes I feel that these oranges do it deliberately to become the talk of the day,” wrote another user. According to another user, the ‘person who posted this must be vigilant on morning walks.’

Meanwhile, Modi sent his condolences on Adhyatmananda’s demise as he tweeted in Gujarati, “It was sad to know that Yoga Guru Swami Adhyatmanandji went straight to Paramdham. He explained a profound subject like spirituality in a simple style. Apart from teaching yoga, Swamiji will also be remembered for serving the society through various creative activities of Sivananda Ashram in Ahmedabad.”