A video of BJP’s motormouth leader Sadhvi Prachi urging Prime Minister Narendra Modi to cause Godhra-like carnage in Pakistan to avenge Pulwama terror attack has gone viral on social media. In the video, the Sadhvi, who has contested assembly polls in Uttar Pradesh on a BJP ticket in the past, has urged Modi to orchestrate another Godhra-like bloodshed to teach Pakistan a lesson. 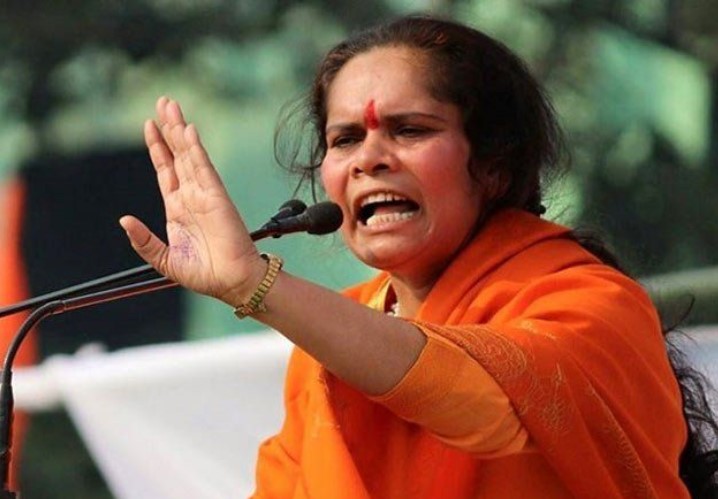 The video, now being widely shared on social media, shows Prachi as saying, “I am requesting the prime minister with folded hands that ‘Mr Prime Minister, the entire country will bow to you if you can cause Godhra-like carnage in Pakistan.’ Terrorism will not end until we burn Rawalpindi and Karachi.”

No sooner did Prachi’s chilling video go viral, social media users including journalists began to wonder if the BJP leader had inadvertently confirmed Modi’s role in the Godhra train burning in 2002. Journalist Ravi Nair wrote, “BJP leader Sadhvi Prachi made two things clear: A) Modi govt will do some drama in the north western border of India in the run up to election. B) She said in open who orchestrated Godhra carnage.”

Journalist Rohini Singh wrote, “Such a shrill voice this one has.”

Here are some other reactions to Prachi’s video:

The lady may be foolish but is Truthful, the exact opposite of Modi.

Now this has become clear Who is behind Godhra tragedy ? Who is the Conspirator ? Shame on BJP ! Shame on RSS ! Shame on Modi !

It’s time for India to rethink the political quality of our nation.
Can India afford such callous and crass representatives in our politics who have almost zero knowledge in everything? No wonder whenever they open their mouth they embarrass the nation, each and every time.

The Godhra train burning incident in February 2002 had left nearly 60 Hindu pilgrims dead. This had led to huge anti-Muslim genocide with Narendra Modi as the chief minister of Gujarat. More than 4,000 Muslims were killed in the state-sponsored genocide although the official number of those killed was only 1,200. Modi faced international isolation as many countries including the UK and the US refused to let him enter into their countries.

Several experts had said that the Godhra train burning may have been the handiwork of the Hindutva brigade to create an excuse to kill Muslims and polarise religious sentiments in that year’s assembly polls. Speaking to The Frontline news magazine in its July/August edition, the then leader of Congress, Shankarsinh Vaghela, had said, “The FSL report shows that someone inside the train set it on fire. No Muslim could have entered the compartment. That too with 60 litres of petrol. The mentality of the VHP (Vishwa Hindu Parishad) leadership is such that they are even capable of killing their own kar sevaks for their own gain. Believe me, I know them very well.”

Even the Forensic Science Laboratory (FSL) report had ruled out the possibility that the compartment was set on fire from outside by a mob. The report, which was also a part of the charge-sheet, had concluded that ‘no inflammable fluid had been thrown inside from outside the coach.’