Remember BJP President Amit Shah famously forgetting his own spokesperson Sambit Patra’s name at a press conference in Delhi? Now, Shah appeared to have ‘slammed’ the Narendra Modi government for their incompetence in resolving national security issues of India. 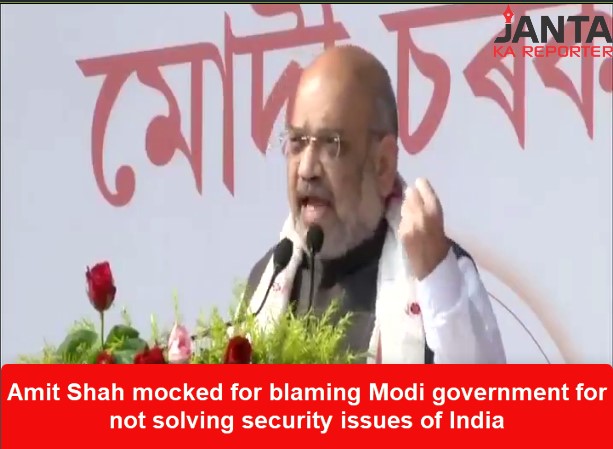 Speaking at a rally in Assam after the Pulwama terror attack, Shah said, “The deaths of 45 CRPF jawans will not go in vain because now we don’t have a Congress government at the Centre, Now we have a government led by Narendra Modi, who you’ve elected. And Narendra Modi government never resolves national security issues.”

It’s not clear whether Shah was deliberately attacking his government for its failure on the national security front or it was a slip of tongue. Many of his supporters felt that Shah was trying to say compromise in Hindi, which is pronounced as samjhauta, but may have ended up saying samaadhan, which in English means solution.

Shah’s gaffe has evoked plenty of reactions from journalists on social media.

Speaking at a convention of the Bharatiya Janta Yuva Morcha, the BJP’s youth wing in Lakhimpur, 380 km northeast of Guwahati in Assam, Shah also said that his party will not let Assam ‘turn into Kashmir.’ “This is our commitment, we will execute NRC (national register of citizens) again and again and pick out each and every infiltrator from Assam.”

This comment invited plenty of wrath on social media with users slamming him for wasting no time in trying to extract the much-needed political mileage out of the Pulwama terror victims.

Shah is known for causing embarrassing gaffes. Not so long ago, he had famously addressed his popular spokesperson Sambit Patra as Sandeep Patra.

During the Karnataka assembly polls last year, Shah was seen lashing out at his party colleagues for wrongly translating his Hindi speech in Kannada.