In a shocking development, Union Minister Prahlad Patel has been caught threatening a desperate son asking for oxygen with ‘two slaps.’ The video of the minister in the Narendra Modi government has caused widespread anger. 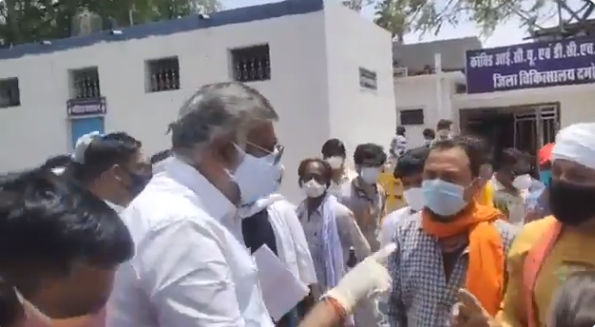 In the viral video, a desperate man is seen complaining about the severe oxygen shortage for his mother in Madhya Pradesh. Angered by the man’s desperate call for help, Patel is heard saying, “If you speak like this, you would get two (two slaps).”

The man says, “That’s acceptable to me. But what do I do when my mother is lying without oxygen.” He then breaks down publicly saying that he was denied oxygen.

As expected, the video has evoked angry reactions from entizens;

SHOCKING: Distressed attendants plead before Union Mantri Prahlad Patel for oxygen but the absent MP says “will give you 2 slaps”!

Pathetic state of affairs. Couldn’t he hear the pathos in his voice. He’s asking for oxygen for his loved one. No apathy ,
Trying to cover up govt’s incompetence with arrogance . pic.twitter.com/3nxs36wUlG

The minister’s arrogance to a desperate call from a son, who’s been looking for oxygen for his mother for 36 hours, is another example of the utter insensitivity of the Centre’s Narendra Modi government. Prahlad, who represents Madhya Pradesh’s Damoh contituency in parliament, is the Minister of State (Independent Charge) of the Ministry of Culture and Tourism in the Indian government headed by Prime Minister Narendra Modi.