Prime Minister Narendra Modi, while addressing an election meeting on 1 April 2019 accused the opposition Congress of maligning ‘peaceful Hindus’ by using the term ‘Hindu Terrorism.’ He said, “they made an attempt to put a blot on ‘peace-loving’ Hindus with a word like ‘Hindu terrorism’. Is there any incident of Hindu terrorism? Even British said Hindus cannot be violent.” 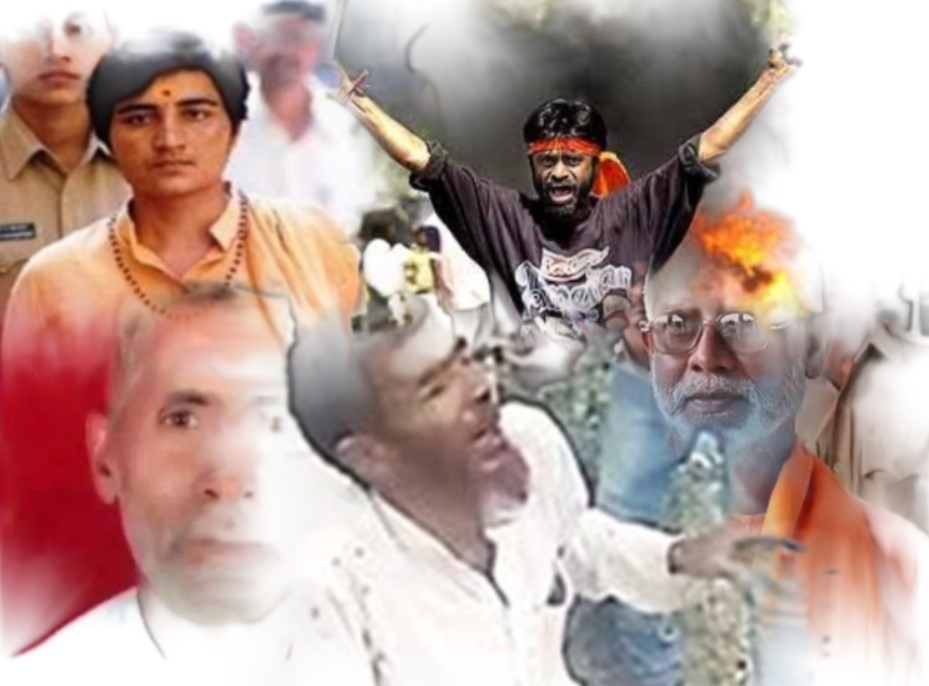 Modi is openly claiming that Hindus can never be violent and ‘Hindu Terrorism’ doesn’t exist. No one knows which British had said so and when, but considering Modi’s past record, he doesn’t bother to see the difference between established facts and his imagination.

Take for instance India’s successful non-violent freedom struggle under the leadership of Mahatma Gandhi. The irony is though Narendra Modi claims ‘non-violence’ as the virtue of Hinduism, he and his party are the bitter critics of Gandhian ideals, and on the other hand, idolise Subash Chandra Bose, who had gone against Gandhi and had unsuccessfully worked for the violent overthrow of the British rule with the help of Nazi Germany and Imperial Japan. What also needs to be pointed out here is that the man who assassinated a non-violent Gandhi, a practicing Hindu, professed and practiced the same ideology that Modi appears to firmly believe in.

Like any other religion, Hinduism too doesn’t promote its followers to indulge in mindless violence though its religious texts approve of retaliation to any violent act. Yet, India’s history is replete with violent wars amongst Hindu rulers. The most famous Indian King Ashoka, while he was a Hindu, had killed a hundred thousand Hindu Kalingans in one of the bloodiest war in Indian history. In the medieval period, there are numerous examples of Hindu rulers looting other Hindu Kingdoms, killing Hindus and desecrating Hindu temples. Even in recent history, Hindu Maratha rulers killed a large number of Hindus raiding Bengal in 1742 and Jaipur in 1750.

Not only have Hindu rulers been engaged in violent acts in the past, but also Hindus in general have been involved in mass-killing on many occasions. In 1947, after India’s partition, more than one million people were killed in the sub-continent and the majority of them were Muslims. After partition, there have been a number of religious riots in India, in which the majority Hindu community has slaughtered a large number of Muslims.

Ordinary Hindus were engaged in the brutal killing of minority Muslims after Operation Polo in Hyderabad in 1948, in Kolkata in 1950 and 1964, in Gujarat in 1969, 1985, 2002, in 1989 Bhagalpur riots, in 1983 Nellie massacre, Mumbai riots in 1992 and 2013 Muzaffarnagar riots. Muslims are not the only minority community, others have also faced the wrath of the Hindu majority.

A large number of Sikhs were killed, most of them in Delhi, by a marauding Hindu mob in 1984, after the assassination of Indira Gandhi. In 1999, Hindutva zealots had burned to death an Australian missionary Graham Staines and his two sons, Phillip and Timothy, aged 8 and 6 respectively, in Odisha. In that same state, in 2008, a number of Christians were also killed by Hindutva fanatics in Kandhmal riots. Not only riots, Hindutva fanatics are also leading the recent upsurge in India of public lynching of Muslims and Dalits, particularly in the name of cow protection.

Nothing in India’s history suggests that Hindus are not involved in violent activities like followers from any other religion. Not only do they have a condemnable record of being engaged in mass violence, but they have also been at the forefront of committing terror acts. India’s father of the nation, Mahatma Gandhi was killed on 30 January 1948 by a Hindutva terrorist. India has sacrificed many of its political leaders to terror violence, and most of them have been killed by terrorists belonging to Hindutva ideology. Some of the leaders who have been the victim of ‘Hindutva terror’ Lalit Narayan Mishra, Rajiv Gandhi, Phoolan Devi and VC Shukla. It is also important to state that no political leader in India has been killed by a Muslim terrorist.

In this context, it is unfathomable that India’s Prime Minister is claiming that Hindus can never be engaged in terror activities. By promoting this misleading discourse, the present regime has weakened the cases against several Hindutva terror accused like Sadhvi Pragya Thakur, Colonel Shrikant Purohit and Swami Assemanand. Due to acts of omission and commission by the present government, accused of many serious terror incidents in 2006-2008, like Malegaon blasts, Mecca Masjid Bombing, Samjhauta Express Bombing and the Ajmer Sharif Dargah Blast in which significant number of Muslims including Pakistani nationals were killed, have managed to escape from the law.

Hindutva terror is a noxious reality in India and the present regime is committing a grave mistake by providing them official patronage. A number of radical Hindu organisations in India have been openly providing arms training to its members. Several rationalists and journalists like Narendra Dabholkar, Govind Pansare, MM Kalburgi and Gauri Lankesh have been recently killed by suspected Hindutva terrorists.

It is nothing but suicidal for the country to remain under the illusion that Hindus are peaceful and incapable of committing violence and terror. Such misplaced facts will not help the country fight the menace of terrorism, which has fast assumed alarming proportions in India. We should not forget that one of the world’s deadliest terror group, LTTE, was primarily an outfit of Hindus. Before it is too late, India should wake up to the grave reality. If there’s any terror group that poses an existential threat to India, it is Hindutva terror, because not only is it a home-grown phenomenon but this group enjoys the patronage of the current BJP dispensation. Narendra Modi should stop peddling an alternative truth for his political expediency.

(Views expressed here are the author’s own. Janta Ka Reporter doesn’t subscribe to them. The writer is a professor of Peace and Conflict Research at Uppsala University, Sweden.)