The raging controversy over the questionable pitch at the Ahmedabad cricket ground gained fresh momentum after former India batsman Sunil Gavaskar said that India must not give importance to opinions expressed by foreign players such as Michael Vaughan and Mark Waugh. Speaking to Star Sports, Gavaskar used a slang term to admonish foreign players every time they raised objections on India’s pitches. Gavaskar’s criticism for foreign players came amidst Vaughan posting a hilarious video of standing on a dug-up patch of a field to liken it to that of the cricket pitch in Ahmedabad, the venue of India’s last two Test matches against England. 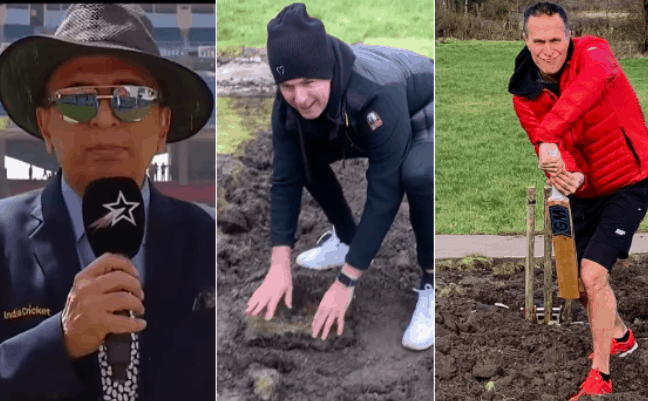 Gavaskar said, “Ham kahe ko inko importance de rahe hain? Ham Kahe ko inko nahi bol rahe hain chal phut. Hamein tum se baat nahi karni hai, chal phut yahan se. (Why are we giving importance to them? Why are we not telling them to get lost? I don’t want to talk to you. Get lost.)”

Without naming anyone, Gavaskar said that foreign players such as Vaughan and Waugh would learn their lesson if the Indian media stopped giving them undue importance.

Gavaskar’s criticism came even as Vaughan took to Instagram to share a video of doing a ‘pitch inspection’ at a dug-up patch, which he called it the ‘Ahmedabad pitch.’ Vaughan said, “Welcome to Ahmedabad. It’s a bit chilly this week, but all the talking point in the last couple of Test matches has been the pitch. I’m happy to say this week it’s a lot better. Looks absolute beauty.”

Vaughan said this while showing the completely ploughed field in a bid to poke fun at the wicket in Ahmedabad. He used the video with a caption that read, “he much anticipated pitch report for the 4th Test !!! #INDvENG !! ?”

This was after Vaughan had posted a photo of himself taking a batting guard on the same dug-up field as he wrote, “Preparations going well for the 4th Test!!”

Vaughan’s hilarious take at the Ahmedabad pitch cracked up many former players including Monty Panesar and Brett Lee, who wrote, “Might do a bit.”

The joke did not go down well with Indian fans, who began to troll Vaughan.

The criticism for the Ahmedabad pitch gained momentum after India defeated England in less than two days in the third Test. The behaviour of the pitch in the last Test too has been similar as the match is unlikely to last for five days. Batting first, England were all out for 205. In response, India were 294/7 at the end of the second day, taking a lead of 89 runs. Rishabh Pant’s impressive century knock followed by a half-century by Washington Sundar played key roles in India taking a crucial lead in the first innings.

India have already taken an unassailable 2-1 lead in the four-match series.