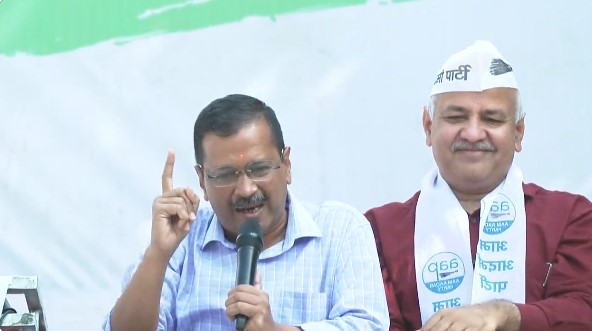 Terming this as a sign of fear among the BJP, Kejriwal tweeted, “Can central govt ‘direct’ any EC to delay/cancel any elections? Under which provision? Are these ‘directions’ binding on EC? Why is EC buckling under pressure? Modiji Ab Is Desh Mein Chunav Bhi Nahi Karayenge?”

Replying to Kejriwal’s attack, Union Minister Meenakshi Lekhi said that the BJP was not a party to get scared of polls. “Our’s is the party which removed Article 370 from Jammu and Kashmir and definitely not the type to get scared. Scared are the ones who have indulged in unethical activities,” Lekhi was quoted by Indian Express as saying.

Kejriwal has been elated by his party’s showing in the just-concluded assembly polls. The party has created history by sweeping Punjab polls and opening its account in Goa, where the AAP has won two seats in the 40-seat assembly. In Punjab, the AAP is set to win 92 out of 117 seats. This is the first time the AAP is going to form a government outside Delhi. The development assumes significance given that Kejriwal founded the political outfit only in 2012.

Reacting to the victory in Goa, Kejriwal tweeted, “AAP wins two seats in Goa. Congratulations and best wishes to Capt Venzy and Er Cruz. Its the beginning of honest politics in Goa.”