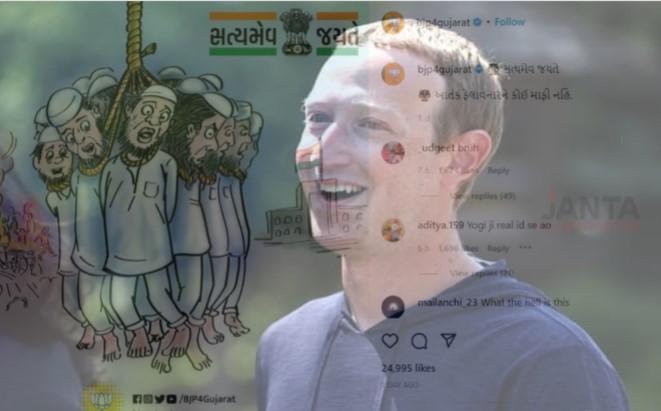 “We didn’t remove BJP4Gujarat’s post. Due to the high volume of reports we receive, our review team hasn’t been able to review your report.

“However, our technology has found that this post likely doesn’t go against our Community Guidelines. Our technology isn’t perfect, and we are constantly working to make it better. We understand that this decision may be frustrating for you, but there are a few things you can do to avoid seeing content you find upsetting.”

Instagram had told users, who reported the BJP Gujarat’s Islamophobic post, to either block or restrict the page in question.

As expected, the social media platform faced global condemnation for its perceived role in promoting Islamophobia. And within minutes, the Islamophobic post shared by BJP Gujarat had disappeared from Instagram.

This is not the first time that Zuckerberg-owned platform has faced widespread condemnation for tacitly promoting Islamophobia. His other two platforms namely Facebook and WhatsApp had come under sharp scrutiny after several US-based media outlets revealed how senior executives working for these two outlets had colluded with India’s right-wing party to promote Islamophobia in the country.

This is how social media users reacted to Instagram’s refusal to act against BJP Gujarat’s Islamophobic post.

This post is on the official page of BJP for Gujarat and the caption reads, “No forgiveness to the terror spreaders”. Hundreds of people reported this dangerous post to @instagram and yet they refuse to pull it down. #Islamophobia pic.twitter.com/XFc8XtG8ae

The instagram page of the BJP Gujarat continues to advocate genocide of Muslims. This must be stopped. For the US, geopolitics should not come in the way of condemnation of the Modi regime.