A video of Agartala District Magistrate Shailesh Yadav conducting a raid at a wedding venue to enforce the established COVID-19 protocol has gone viral on social media. The IAS officer is, however, facing flak for resorting to abusive language and physical assaults against the guest during his raid. 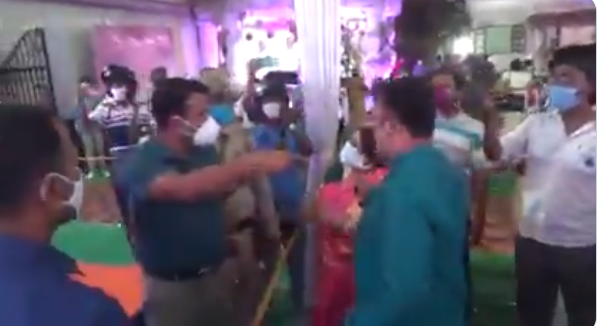 In the viral video, Yadav could be seen roughing up the wedding guests as he asked them to leave the venue immediately. He also pulled up the local police for not enforcing the COVID protocol.

Addressing a police officer standing next to him, the IAS officer said, “All those people, who assembled here, they’ve violated the order under Section 144 CrPC and they will be prosecuted under Section 188 of the IPC. They will all be arrested right now. And I will also recommend to the government to suspend the OC of the West Agartala Police Station.”

Tough times calls for tough measures..wish to see the same kind of action on other religious gatherings also.#COVID19India pic.twitter.com/wm6TCkJQdO

However, his action evoked angry reactions from netizens including industrialist Naveen Jindal, who asked Tripura Chief Minister to act against the officer. Jindal wrote, “This is horrible behaviour from an IAS officer. While we have to ensure Covid protocols are in place this brazenness is totally unacceptable & unbecoming of an officer. Slapping, abusing and humiliating people…Action must be taken against such an officer. @BjpBiplab ji.”

This is horrible behaviour from an IAS officer.

While we have to ensure Covid protocols are in place this brazenness is totally unacceptable & unbecoming of an officer.
Slapping, abusing and humiliating people…

Action must be taken against such an officer @BjpBiplab ji. https://t.co/unvvVLa2Jj

(1/2)Watch Tripura’s DM West, Shailesh Yadav IAS beating the hell out of people who violated Night Curfew rules in Agartala..!
At the end didn’t even spare the pundit!

How come such a foul language, slapping priest of wedding ceremony, slapping guest and tearing the marriage approval on family members face can be considered as security measure?

An action should be initiated against Agartala DM for his abuse of power. He has no right to behave in this manner. Being a civil servant this kind of assault is not at all acceptable. He could have handled the matter in a courteous way too. This is shameful. #AgartalaDM https://t.co/pf1h06pvVu

The marriage hall incident took place in Agartala city, and DM had to take such drastic action after local police turned a deaf ear. He is initiating action against local police also. #Salute DM. ????????. Actual clip is 5 min pic.twitter.com/2A6JZx8jl1

While everyone said that the COVID protocol needed to be enforced given that the pandemic was wreaking havoc across India, they questioned the use of violence and expletives against the guests.