Prime Minister Narendra Modi on Wednesday fiercely defended the Indian media denying allegations that their ethics were compromised to support the BJP in this year’s Lok Sabha polls. Modi’s fierce support for the media assumed significance in light of his own statement, calling them baazaaru (one who can be bought, whose ethics are compromised) five years ago. 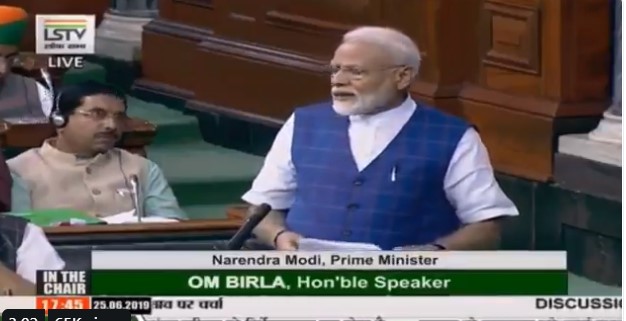 Modi said in the parliament, “I am astonished to note that even the media is being abused. (They say) elections are won because of the media. Where have we reached? Are media sold out or what? Is someone capable of buying the media? And do we win elections by controlling the media? Will this theory also apply to Tamil Nadu and Kerala? We must be careful what we say inside the parliament.”

Five years ago, while campaigning in the Delhi elections, Modi had appealed for votes saying that a conspiracy had been hatched by baazaaru log (people who can be bought) to ‘mislead the country’ with such surveys. One of his senior party colleagues and minister in his cabinet, General VK Singh, had earlier called journalists presstitutes.

Modi also defended the Electronic Voting Machines and admitted his own party’s mistake of having opposed them in the past. Modi, however, said that this was because it took time for his party to understand the technology.

He said, “A new disease has started. Questions are raised on EVMs and its efficiency. But, we were also two (had only two MPs in Parliament) at some point. People used to mock us. But we worked hard and built our cadre base. We never cried foul blaming ballot papers etc.”

Modi spoke for 66 minutes with nearly 40 minutes being devoted to explain how his party’s victory in this year’s parliamentary polls must not be doubted since, according to him, polls were conducted in a free and fair manner.

He also attacked the Congress for suffering from a disease which meant that ‘neither can they digest victories nor can they accept electoral defeats.’