A gruesome murder of a family in West Bengal’s Murshidabad district last week sent shockwaves across the country. This was after photos of the murdered family that included a couple with their young child lying in a pool of blood -went viral on social media. The BJP and its foot soldiers in the Indian media moved with lightning speed to immediately conclude that the murdered man, identified as a 40-year-old school teacher,  Bandhuprakash, was an RSS man. 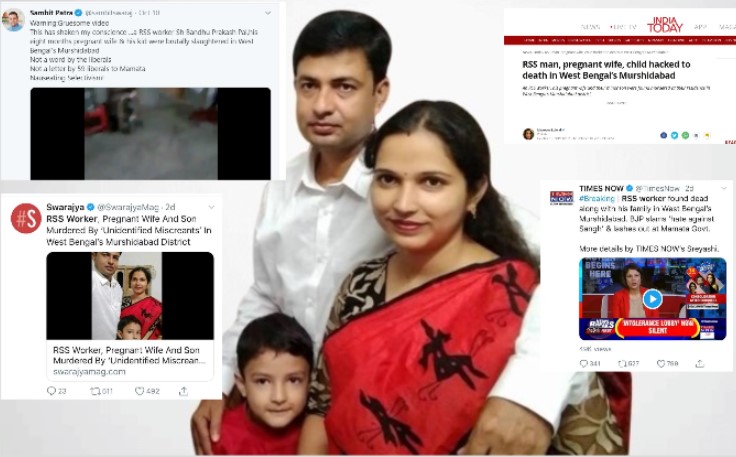 BJP spokesperson Sambit Patra shared the video from the murder scene and wrote, “Warning:Gruesome video This has shaken my conscience …a RSS worker Sh Bandhu Prakash Pal,his eight months pregnant wife & his kid were brutally slaughtered in West Bengal’s Murshidabad Not a word by the liberals Not a letter by 59 liberals to Mamata Nauseating Selectivism!” 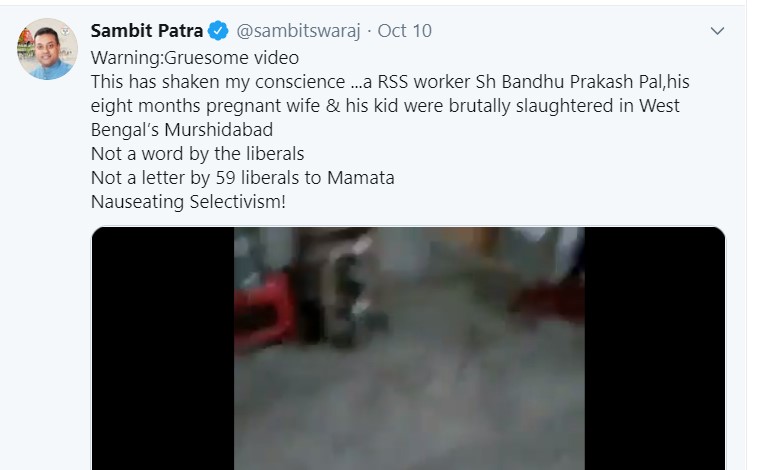 Patra’s party colleague and a union minister in the central government, Ravi Shankar Prasad went a step further as he bizarrely demanded a reaction from India’s liberals. Prasad wrote, “Deeply condemn this barbaric act of murder of RSS worker, his wife and child in West Bengal. Hope liberals will find it ghastly enough to empathize with the bereaved family if not condemn and criticise it outrightly.” 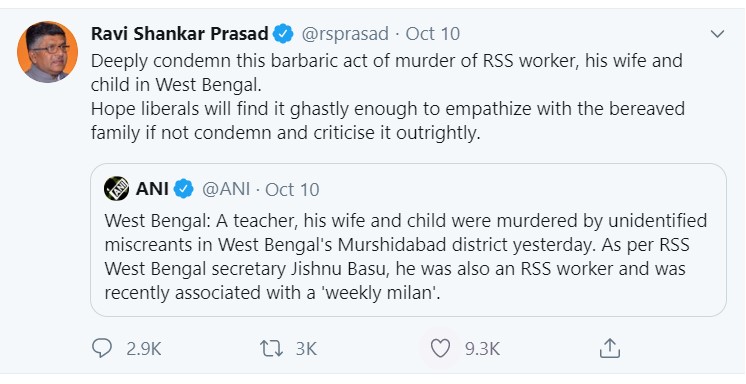 Similar reactions followed from other BJP supporters and office-bearers. What was astonishing was that these BJP functionaries had reached their conclusions on the motive of the murder even before the cops could start their investigations. The family members of the victims too had yet to comment on the matter.

As expected, the BJP found plenty of support from the Indian media with the usual suspects flashing unverified and unattributed headlines to propagate the saffron party’s propaganda. India Today’s headline read, “RSS man, pregnant wife, child hacked to death in West Bengal’s Murshidabad.” The headline of India Today report did not specify that this was a claim made by the BJP or local unit of the RSS. 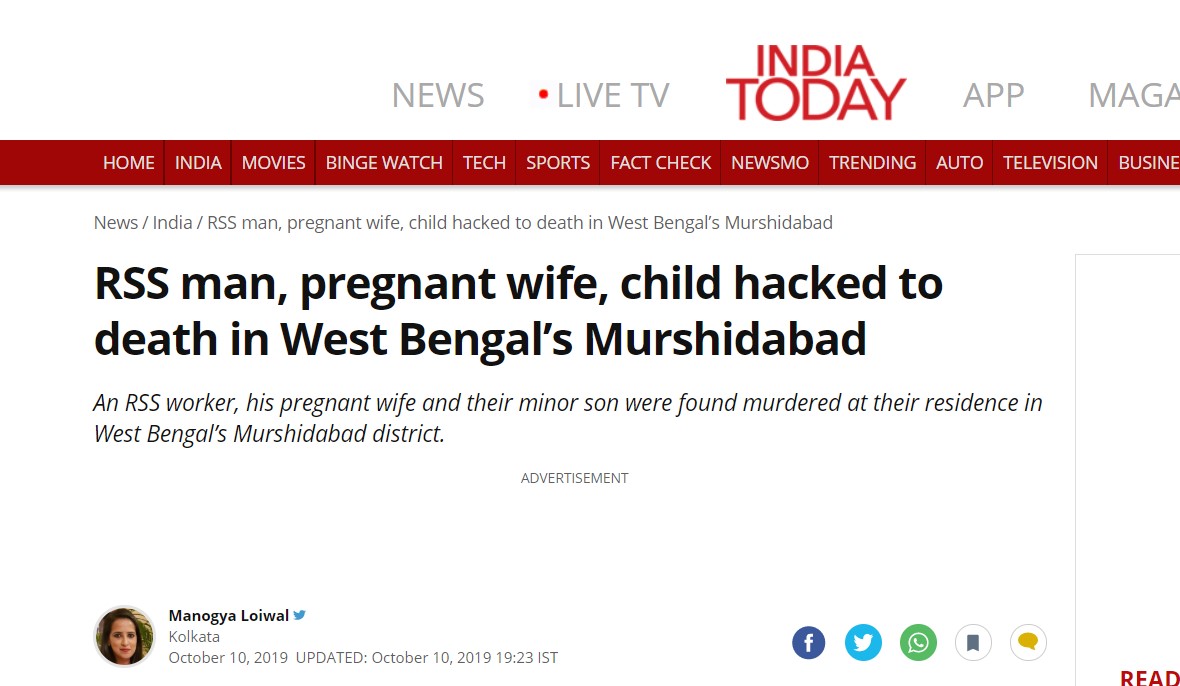 India Today’s Hindi channel Aaj Tak too carried a similar headline as it wrote, “Anger after the murder of RRS worker as people take to streets.” Incidentally, both India Today and Aaj Tak have their own ‘fact-check’ departments within have often prided themselves for busting fake news.

Almost all other mainstream media outlets followed the suit. For example, Times Now’s headline on Twitter read, “RSS worker found dead along with his family in West Bengal’s Murshidabad.” 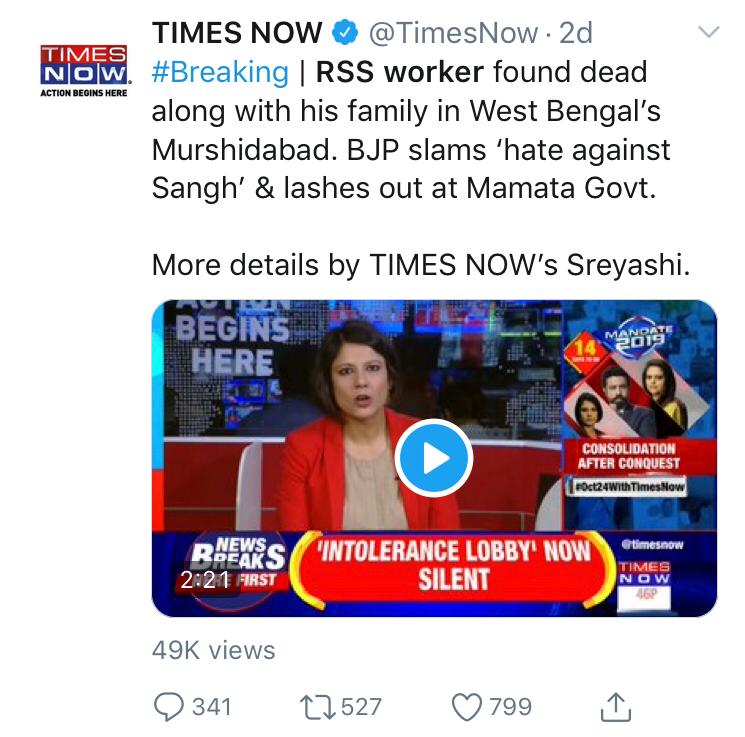 Not to be left behind were the usual suspects in the right-wing pro-Hindutva individuals and outlets, known for peddling fake news. The headline by right-wing propaganda blog page OpIndia read, “RSS worker, his pregnant wife, 8-year-old son brutally murdered in Murshidabad, police clueless.” OpIndia has been a serial peddler of fake news as repeatedly exposed by Janta Ka Reporter in the past. 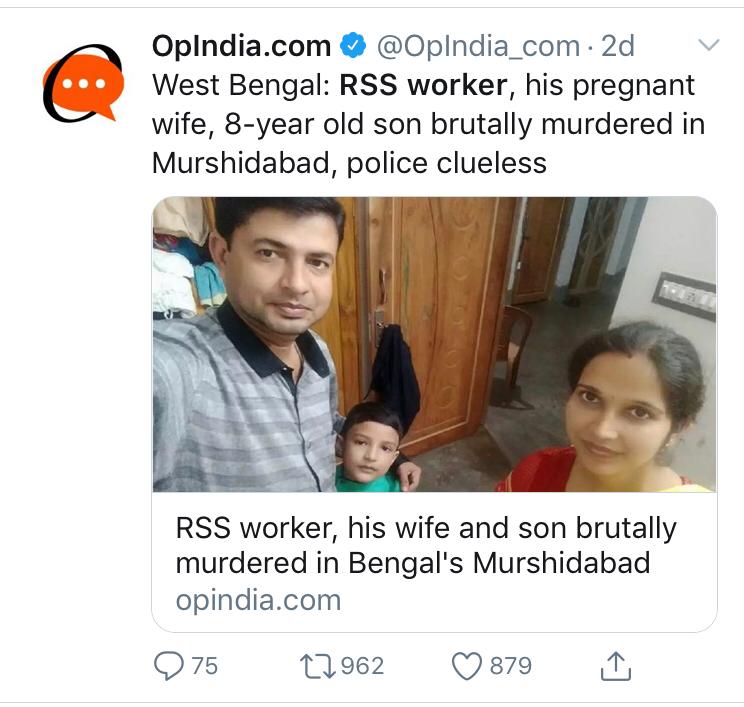 Both the Swarajya website and its editorial director R Jagannathan, also known as Jaggi, were included in the list of outlets and individuals that routinely peddled fake news in the past by the BBC in its findings on fake news in India last year.

Here’s how other foot-soldiers of the BJP tweeted on the Murshidabad murder. 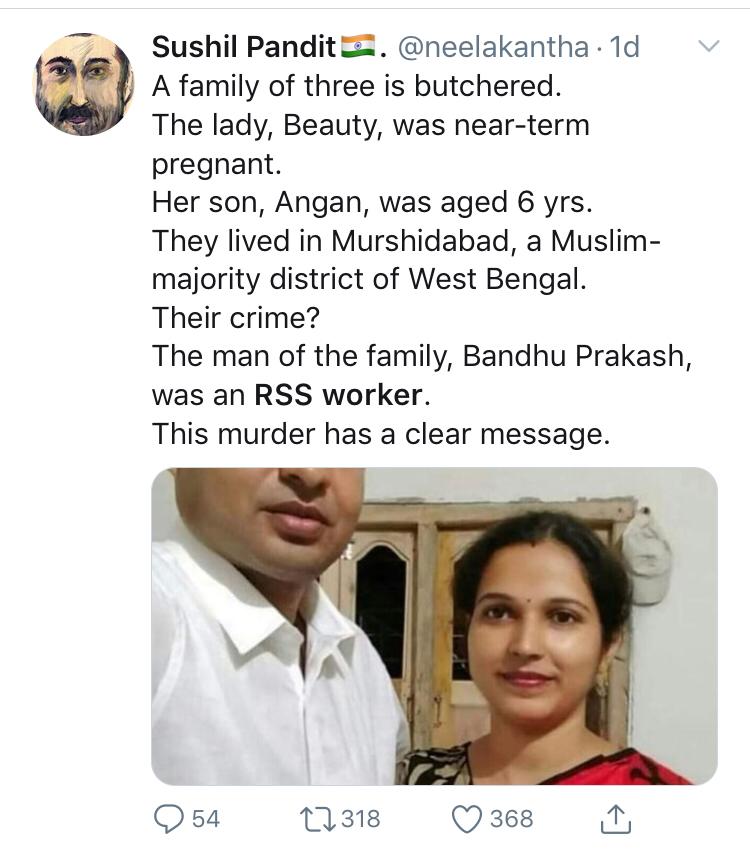 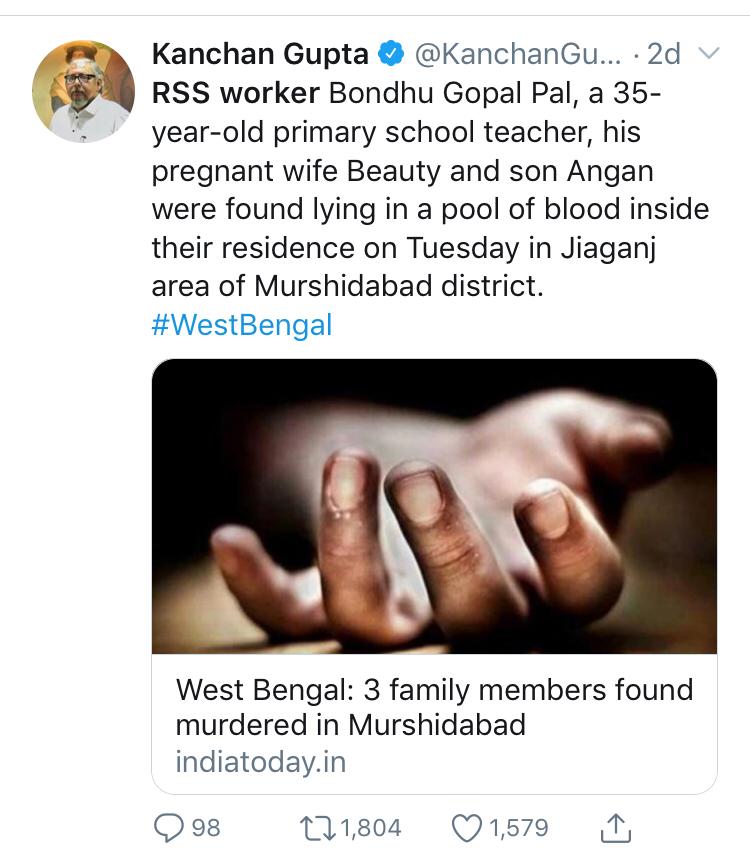 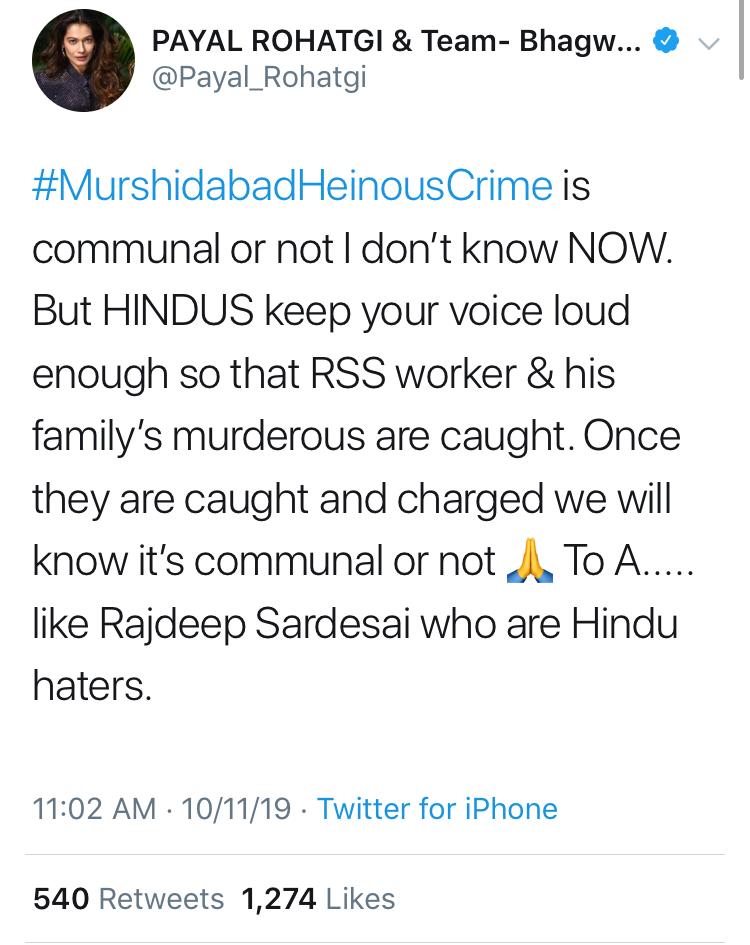 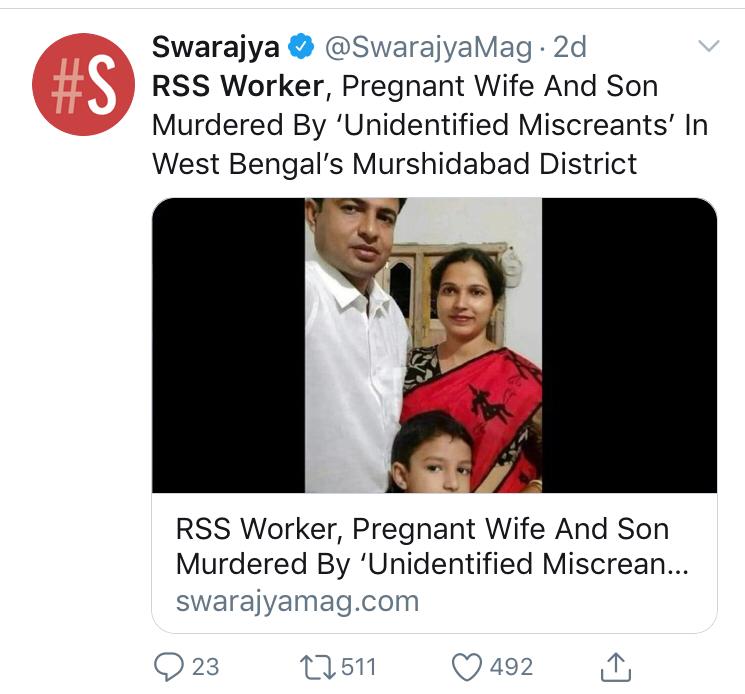 The Murshidabad Police on Thursday said that its preliminary probe into the murder indicated that the motive of the murder may have been ‘personal reasons’ as it failed to find a ‘political connection.’ In a series of tweets, the West Bengal Police wrote, “Investigation was started just after incident and 2 persons hv bn detained and are being examined. It has so far bn found in investigation that the deceased person was also working as agent of some insurance and chain companies and was in a serious financial crisis. His family members have denied affiliation with any political group. A diary note found is suggesting serious differences in the family.”

The cops said that ‘prima facie it seems to be a case of personal enmity and it has nothing to do with politics.’

CID has been asked to get associated with investigation. Prima facie it seems to be a case of personal enmity and it has nothing to do with politics.(3/3)

Mayarani Pal, the mother of Bandhuprakash, told Kolkata-based The Telegraph newspaper that her husband had a second wife with two sons and a daughter. According to Pal, she had fought a prolonged legal battle and won the right to inherit her husband’s property for Bandhuprakash.

“I think the half-brothers and half-sister of my son have a hand in the murders. My daughter-in-law would never have opened the door to let anybody in if the miscreants were unknown. I want stern punishment for the killers,” Mayarani was quoted by The Telegraph.

Twitter user Abhishek Bagchi posted a video clip of Bandhuprakash’s brother-in-law, who rejected the claims of any RSS link. He said, “My brother-in-law was not associated with any party in any way…Those who are linking him to political parties are all wrong.”

Wife’s Brother Clarified Victim was NOT associated with Any Political Party. He was busy with his Job & Family pic.twitter.com/OgrBmePiYZ

Left red-faced, Swarajya issued a clarification stating that ‘While it is true that a lot of BJP and RSS workers have been murdered in West Bengal, it is too early to say that the brutal murder of the family in Murshidabad had any political angle to it.’

Other individuals, media outlets, senior BJP leaders or their footsoldiers on social media have not yet apologised for peddling fake news, which could have flared up communal tension in West Bengal, resulting in loss of more human lives and destruction of property in a state, known for communal sensitivity.