BJP’s controversial spokesperson Sambit Patra heaped considerable embarrassment on himself and his party colleague, Union Minister Kiren Rijiju. Both were the guests on this year’s India Today conclave on Friday, when Patra showered praises on Prime Minister Narendra Modi for being an inspiration to him. He also counted the list of India’s recent achievements both during its air strikes deep inside Pakistan and aerial combat with the Pakistani Air Force, which led to the downing of one MiG 21. India also claimed to down one F -16 fighter jet of Pakistan. 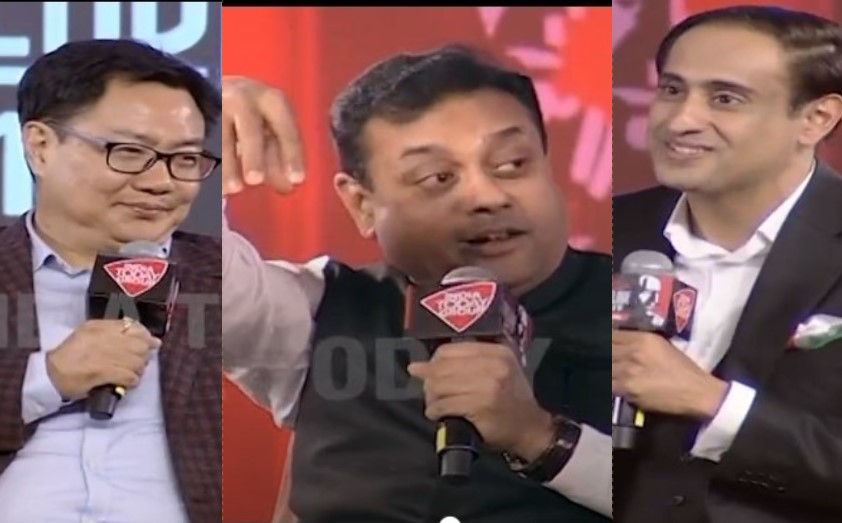 Patra said, “Today, let me don the hat of a spokesperson of India. Abhinandan ji, Wing Commander Abhinandan is back in India. The sense of elation that we are feeling, the sense of jubilation.”

He continued in his own inimitable style, “What Pakistan lost in three days. Pakistan thought it would perpetuate terrorism and this will go unabated. For the first time, not a punitive measure but pre-emptive measure…It’s not that the army did not have courage, what we lacked was the political will. I thank the present dispensation for this political will. For the first time, the Air Force, which is used as the last line of escalation, that Air Force was used. The Air Force crossed the LoC, it bombarded at the heart of the city which belongs to Imran Khan…There were Imran Khan murdabad slogans inside the parliament of Pakistan. For domestic consumption, F-16 was sent. A MiG 21 blows out the F-16 of Pakistan…Just imagine, we hands tied, this is what India can do to Pakistan. What will India do when our hands are free.”

Even before Patra could continue, the programme’s host Rahul Kanwal intervened to make a brief observation on the BJP spokesperson’s rant, seemingly bereft of facts.

Kanwal said, “The manner in which he (Patra) says, he says like a Gospel and so much confidence that you almost imagine that all those facts are absolute truth. He said the city that Imran Khan comes from. Pakistan says we threw bombs at a hill, I don’t necessarily agree with that, but that’s what it says. Whether it’s a village or a madrassa or a hill, but it was certainly not a city. That’s the first part.”

Patra tried to save his face by clarifying, “Balakot, at the heart of Balakot.”

“But we didn’t hit the heart of Balakot,” responded Kanwal.

The BJP spokesperson was in no mood to face public embarrassment. So this time he added that there was a hill at the heart of Balakot. The India Today editor replied, “Balakot is a town. Away from the town there are some hutments, which we took down. But we haven’t seen the evidence. We haven’t seen the evidence, that’s the fact. The other thing you are saying is that the MiG 21 took down the F-16. Again the fact is, one F-16 went down, but we don’t know if the MiG 21 took it down or what form it went down, we don’t know. That’s the problem. The confidence with which you say that city, village, hutment and hilltop, all of these can get blurred.”

Kanwal then turned to Rijiju to ask what he made of Patra’s false confidence, making claims without facts. He asked, “Mr Rijiju, do you think that this is the new generation of TV day spokespersons. Where am I left behind, see how this happens (now a days).”

Sensing that neither could he endorse Patra’s claims that haven’t been confirmed by the government nor was he able to defend his lies, Rijiju requested, “My request is, let us shift to another topic.” His predicament left the audience in splits as the room exploded with laughter.

Several pro-government media channels have been desperate to show the Centre’s Narendra Modi government in good light over the recent escalation across both the sides of the Line of Control. They were quick to praise Modi for having killed around 300 imaginary terrorists in Balakot. The Indian Air Force, which was asked to confirm the number on Thursday, refused to comment saying speculating on casualties will be premature.

Wing Commander Abhinandan, who was flying MiG 21 and captured by Pakistan, returned home on Friday night.