A video of Union Minister Maneka Gandhi lashing out at her own party’s IT Cell has now gone viral on social media. This is just days after the BJP candidate from Sultanpur was attacked for threatening Muslims in her constituency with consequences if they did not vote for her. 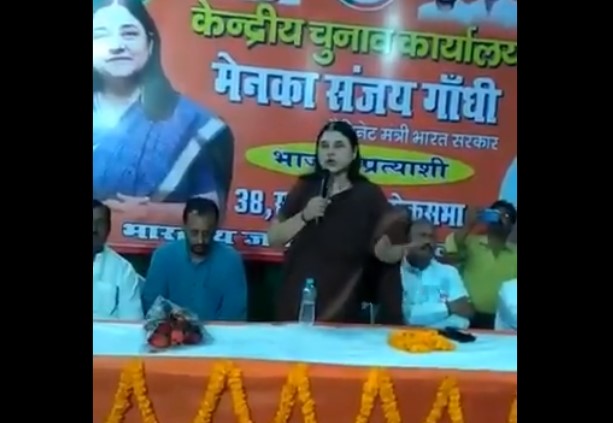 In the new video, shared by journalist Anurag Dhanda on Twitter, Gandhi can be seen slamming her own IT Cell for not adequately defending her when she faced public condemnation because of her controversial remarks against Muslims. She says, “The IT Cell did not react at all. Neither did they take my speech nor they reacted at all. I don’t know if I even need such an IT Cell. You can’t win elections by simply posting my photos on Facebook throughout the day.”

She then went on to advise her social media army what they needed to do in the event that she faced attack from the opposition. She said, “Whenever you see we are being targeted, and mind you the attack has just begun, many such attacks will follow but I’m known for sharp tongue. So, if you don’t improve, then there is no use of this IT Cell.”

Last week, Maneka had faced public condemnation for telling a group of Muslim voters in Sultanpur that she did not need their votes but it was in their interest to vote for her as they will need her help after the elections. She had also threatened them that she will not entertain their work after she won from Sultanpur if she came to know that Muslims had not voted for her.

She had said, “I am winning with the help and love of people. But I wouldn’t like if my victory happens without the help of Muslims. I must tell you that then I feel bad. Then, when a Muslim comes to me for some work, I am inclined not to work (for Muslim). After all, jobs are also a deal. We are not the children of Mahatma Gandhi.”

She had gone on to clarify her statement on Mahatma Gandhi further as she continued, “It’s not that we will only keep giving you but you will punish me in the elections. Is it true or not? I will win without you, I will win with your help too. This, you have to spread everywhere.”