BJP’s national spokesperson Sambit Patra has revealed that Republic TV’s Arnab Goswami had played a huge role in making him famous. Patra, who’s contesting from Odisha’s Puri parliamentary constituency, told a TV channel that taking part in Goswami’s debate shows had been a huge honour for him. 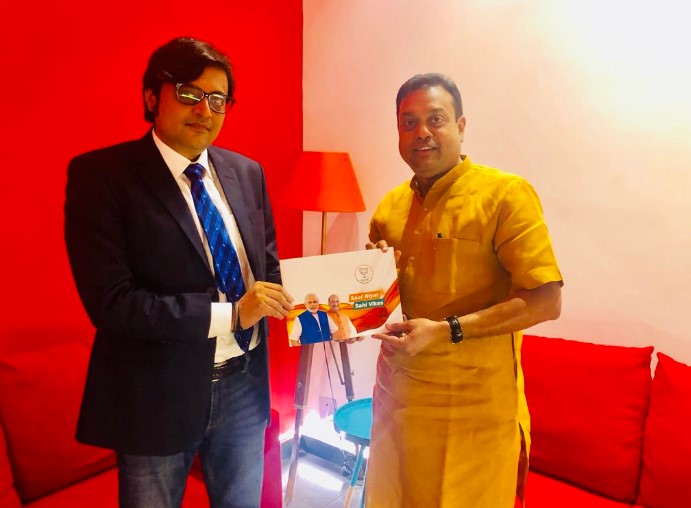 “If I am loved on TV channels today, then please tell Arnab (Goswami) ji that he has also played a huge role in that. The way I have appeared so many times on Arnab’s debate, I have come to realise, that this itself is a huge feat,” Patra told Republic TV.

The BJP spokesperson has been on a frantic tour of his constituency, seeking to meet as many potential voters as possible. One of the striking features of Patra’s campaign has been his penchant for food. His social media timeline is replete with photos of him having a meal with his constituents from Puri. Although, one such photo of him enjoying a meal with a widow had landed him in controversy, this did not deter him from repeating the act again.

He told the channel that he loved to eat chillies quite a lot, but wasn’t sure whether it made him a bitter person. ‘That I will let you decide,” he told the reporter.

Patra also revealed that his mother was really excited when the Indian Air Force carried out the air strikes deep inside Pakistan in February this year. He also said that his mother agreed with Prime Minister Narendra Modi’s idea of conducting Lok Sabha and assembly polls simultaneously. “She thinks that this will help India avoid waste of money,” Patra said.

This year’s Lok Sabha polls are taking place in seven phases. The counting will take place on 23 May.