In an unprecedented legal action against Arnab Goswami, his TV channel Republic TV, Times Now and its editors Rahul Shivshankar and Navika Kumar and Goswami’s colleague Pradeep Bhandari, some of the biggest names in Bollywood namely Shah Rukh Khan, Salman Khan, Aamir Khan and Karan Johar moved the Delhi High Court seeking to curb the irresponsible, derogatory and defamatory remarks being made against the film industry. 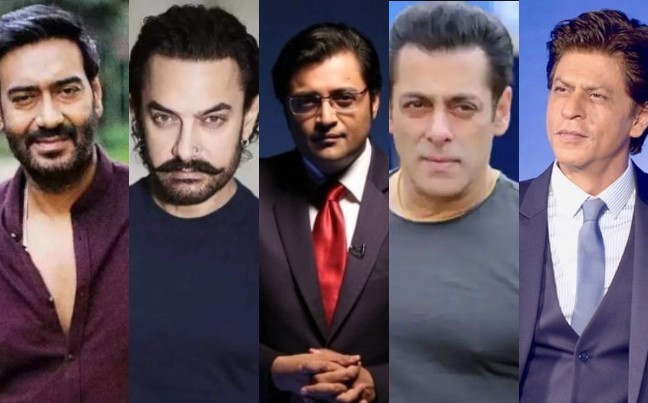 Among those joining hands against Goswami’s Republic TV and Times Now are 38 leading names from Bollywood including Aditya Chopra and Farhan Akhtar. They have objected to terms such as ‘dirt’, ‘filth’, ‘scum’ and ‘druggies’ being used to defame Bollywood during the coverage of Sushant Singh Rajput’s death.

According to the Bar and Bench website, the DSK Legal has filed the petition in the court. The plea read, “The livelihood of persons associated with Bollywood is being severely impacted by the smear campaign being run by the Defendants. This is in addition to the ongoing pandemic which has resulted in extreme revenues and work opportunity loss. The privacy of the members of Bollywood is being invaded, and their reputations are being irreparably damaged by painting the entire Bollywood as criminals, seeped in drug culture, and making being part of Bollywood as synonymous with criminal acts in the public imagination.”

A report by NDTV said that the filmmakers also demanded that the channels abide by the 1994 programme code and ‘withdraw, recall and take down all the defamatory content published by them against Bollywood.’ They alleged that the same channels and individuals were ‘openly flouting’ the Programme Code framed under Section 5 of the Cable Television Networks (Regulation) Act, 1995 contained in Rule 6 of the Cable Television Network Rules, 1994.

Bhandari, in particular, has been summoned by the Mumbai Police in connection with his coverage on the death of Sushant Singh Rajput.

The Bollywood producers have made it clear that they did not want ban on the coverage on Sushant’s death but sought permanent injunctions on Goswami, his TV channel and colleague and Times Now, Shivshankar and Kumar ‘from carrying on reportage and publication of material that violates applicable laws.’