Actor Anupam Kher on Wednesday reacted angrily after veteran actor Naseeruddin Shah called him a clown, who must not be taken seriously. Kher posted a hard-hitting video on Twitter even though he said that he wasn’t bothered by what Shah said about him. 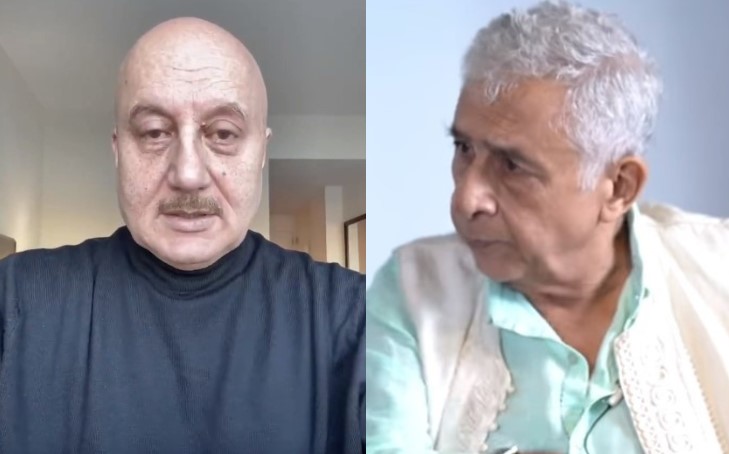 Sharing his video response, Kher wrote, “My message of love for Mr Naseeruddin Shah. He’s elder to me and has more experience than me. I’ve always respected his art and will always do so. But, at times it’s necessary to give a fitting reply. So, here’s my response.”

Kher said in his video reply, “Though I have never said anything bad about you but now I will. You have spent your entire life in frustration, despite achieving so much. If you can criticise Dilip Kumar sahab, Amitabh Bachchan, Rajesh Khanna, Shah Rukh Khan and Virat Kohli, then I’m sure I’m in great company.”

Kher also accused Shah of taking drugs as he said, “None of them has ever taken your statements seriously as we all know that due to the substances you have been taking all these years, you don’t realise the difference between what is right and what is wrong.”

Shah had earlier said that Kher, a known supporter of the BJP and its Hindutva agenda, Kher was a sycophant and must not be taken seriously. He had told The Wire website, “These people, the Twitterati, I really wish they would make up their mind what they believe in. Someone like Anupam Kher has really been vocal. I don’t think he needs to be taken seriously. He’s a clown. Any number of his contemporaries from NSD and NSDI can attest to his sycophantic nature. It’s in his blood. He can’t help it.”

Kher said that if Shah gets ‘some headlines’ by criticising him, then it would be his gift to him. He said, “And do you know what is there in my blood? Hindustan. Just understand this.”

Shah, a legendary actor known for his criticism of government policies, had criticised the Citizenship Amendment Act, which has led to widespread protests in the country, as a law that is divisive.

He had also mocked Narendra Modi’s questionable educational qualifications adding that he will never be sympathetic to students in campuses across the country since the prime minister himself was never a student.