A team from the Rajasthan Police on Saturday arrived at the house of News18 India anchor Aman Chopra to arrest the controversial anchor in a sedition case. However, the anchor working for Mukesh Ambani’s channel allegedly fled from his house, forcing the cops to post the arrest warrant at the door of his house. 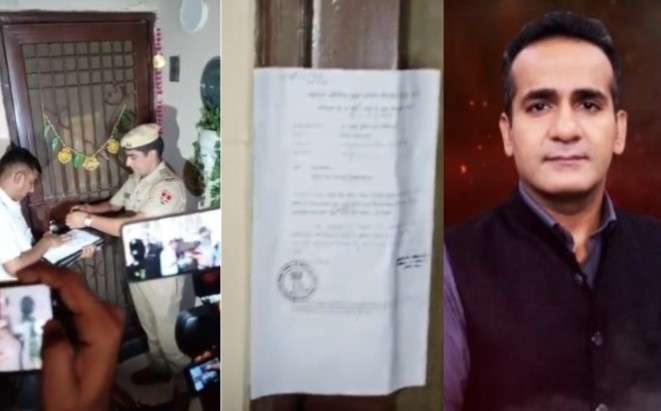 The Rajasthan Police had booked Chopra under serious charges including sedition for promoting religious animosity by peddling fake news.

In viral videos shared on social media, a team of cops from the Rajasthan Police could be seen entering the housing society where Chopra lived. The team was escorted by the Uttar Pradesh Police personnel, who report to the BJP government in the state.

It appears that Chopra was alerted about the arrival of the Rajsthan Police team, prompting him to allegedly run away from the scene to avoid the arrest.

His supporters have called the action by the Rajasthan Police ‘illegal’ saying that a high court had barred cops from taking coercive action against the anchor.

The Rajasthan Police is believed to have visited the office of News18 India with an intention to arrest Chopra last week. But, according to sources, the anchor had once again fled from the scene. Chopra also did not appear on TV for two days fearing arrest.

Two separate FIRs have been filed against Chopra in Rajasthan’s Bundi and Dungarpur districts. The anchor has been booked under sections 153 (Promoting enmity between different groups on grounds of religion, race, place of birth, residence, language, etc., and doing acts prejudicial to maintenance of harmony), 295 (Injuring or defiling place of worship with intent to insult the religion of any class), 295-A (Deliberate and malicious acts, intended to outrage reli­gious feelings), 120 B (Punishment of criminal conspiracy), 124 A (Sedition) and 67 (Imprisonment for non-payment of fine).