Gujarat Titans skipper Hardik Pandya has been called one of the ‘classless persons to play cricket’ after he was seen allegedly abusing his senior Mohammad Shami during their match against Sunrisers Hyderabad on Monday. 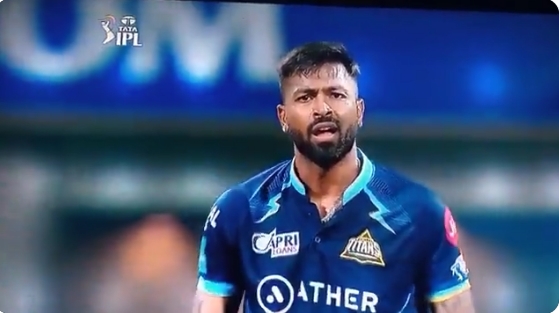 Gujarat Titans lost their match against Hyderabad by eight wickets. Hardik Pandya was the top scorer of his side as he remained not out at 50 from 42 balls. However, his team could only score 162-7 in 20 overs.

As Sunrisers Hyderabad began their run chase, they did not look in trouble in chasing the target. Pandya looked in distress all through the match and vented his frustration at his senior teammate Mohammad Shami.

This was after Rahul Tripathi hit Pandya in the third man region as the ball went to Shami. Pandya lost his cool accusing Shami of not trying to go for the catch. Fans shared the video of his outbursts accusing the Gujarat Titans skipper of abusing Shami, who’s his senior Team India colleague.

Pandya, who played for Mumbai Indians until last year, had joined the newly formed Gujarat Titans last year and was named the IPL franchise’s captain. Many fans felt that Pandya did not deserve to be the captain and lacked the maturity and class to do justice to the role of captaincy.

Others said that the player from Gujarat was a serial offender and had misbehaved with another teammate David Miller in the previous match.

Hardik Pandya has to be one of the most classless person to play cricket.
he has shouted on miller,shami, nalkande till now.
such a crass sportsman.#SRHvGT

Hardik Pandya abusive reaction to Shami was not in good sports in today's match when shami decided to stop four instead of attempting catch at boundary. Shami must have felt insulting.

Last day @hardikpandya7 did the same with @DavidMillerSA12. He is showing attitude to all his team mates.

The attitude which he is showing like a "boss". He can be a "boss" but can never be a "leader".
Feel sad for legend @MdShami11 #IPL #unacademyAsktheExperts pic.twitter.com/dN2zpepbxo

In 2019, Pandya had to face considerable flak from cricket fans, who accused him of being disrespectful to Zaheeer Khan, one of the greatest fast-bowlers India has produced.

This was after Hardik had shared a video clip of a match while wishing Zaheer on his birthday, where he was seen hitting the former India bowler for a six. He had written, “Happy birthday Zak … Hope you smash it out of the park like I did here.”

But, Zaheer Khan had decided to shut Pandya up by posting a terse reply. He had written, “Hahahaha….thank you for the wishes @hardikpandya7 my batting skills can never be as good as yours but the birthday was as good as the next delivery you faced from me in this match.”