Nita Ambani’s stunningly beautiful daughter-in-law Shloka Mehta is known to live a simple life despite hailing from a billionaire diamond merchant family. She’s continued to stick to her simplicity even after marrying Akash Ambani, the son of Asia’s richest businessman Mukesh Ambani. However, earlier this week, Shloka was seen competing with sister-in-law Isha Ambani as both Ambani ladies raised the glamour quotient during the wedding of Kareena Kapoor Khan’s cousin Armaan Jain. The wedding party also saw Kareena and Saif dancing with their son Taimur. Videos and photos of the wedding function featuring Shloka, Isha, Nita, Kareena, Saif and Taimur have gone viral on social media platforms. 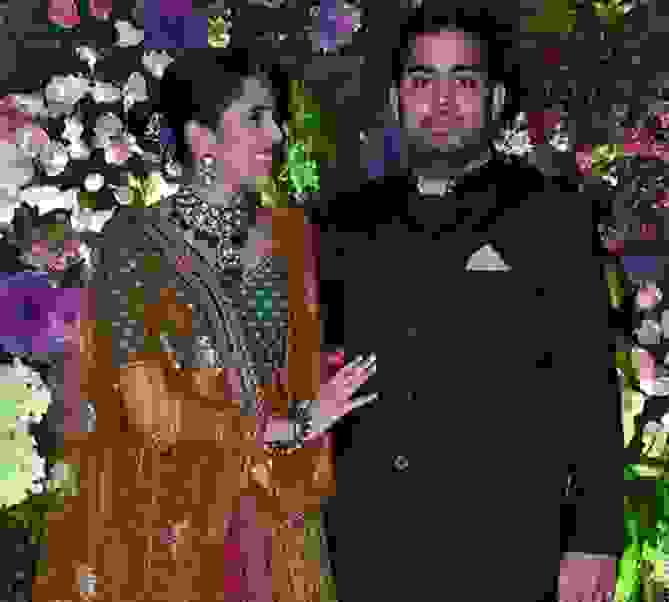 It was lehengas galore as the who’s who of the entertainment and business industry descended on the premises of Armaan Jains wedding ceremony.

A post shared by Shloka Ambani Encyclopedia (@shlokaakashambani_fp) on Feb 4, 2020 at 10:38pm PST

Shloka had chosen to dump her no-makeup policy for the party as she flaunted her stunning lehenga designed by Sabyasachi. A multi-hued lehenga with a parrot green choli showed off Shlokas well-toned midriff. The orange embroidered net dupatta went beautifully with the pink, yellow pink and yellow on her lehenga. With hair pulled back, Shloka completed her look with her signature emerald necklace from her wedding day.

A post shared by Shloka Ambani Encyclopedia (@shlokaakashambani_fp) on Feb 4, 2020 at 10:22pm PST

Her husband Akash went for a typical black band gala with matching trousers.

This is not the first time Shloka has chosen to flaunt the emerald necklace. Earlier, Janta Ka Reporter had highlighted the Ambani daughter-in-law’s love for an emerald necklace. In one photo, Shloka posed with her gaze down reminding us of her jaw-droppingly beautiful avatar during her own wedding.

A post shared by Shloka Ambani Encyclopedia (@shlokaakashambani_fp) on Feb 4, 2020 at 9:28pm PST

Elsewhere, a video of Saif Ali Khan carrying his own Taimur on his shoulder while wife Kareena accompanied too has gone viral. The video showed Kareena shaking a leg at the wedding function of her cousin Armaan. Armaan’s mother Rima is the sister of Shweta Bachchan’s late mother-in-law Ritu Nanda, who’s the aunt of Kareena and Karisma Kapoor.