Prime Minister Narendra Modi on Saturday launched a campaign by using Twitter hashtag #MainBhiChowkidar in a bid to counter Congress President Rahul Gandhi’s much-publicised campaign #ChowkidarChorHai against him. Within hours the hashtag  #MainBhiChowkidar had become a top global trend on the microblogging site. But, little did Modi know that a Twitter user Nirav Modi will leave him stumped by heaping embarrassment on him. 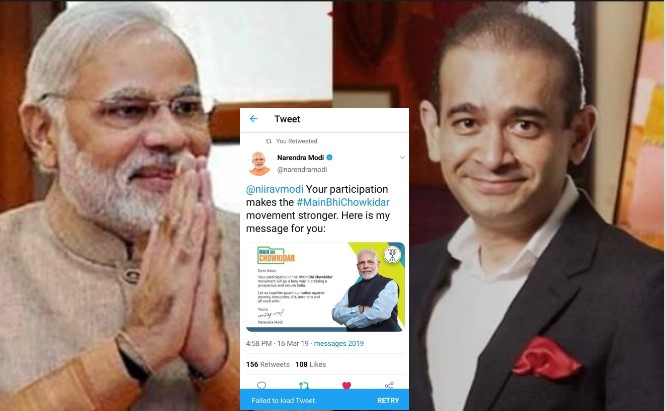 While launching the Twitter campaign, Modi had written on Twitter, “Your Chowkidar is standing firm & serving the nation. But, I am not alone. Everyone who is fighting corruption, dirt, social evils is a Chowkidar. Everyone working hard for the progress of India is a Chowkidar. Today, every Indian is saying-#MainBhiChowkidar.”

Moments later a Twitter user with the name Nirav Modi also posted a tweet by using the hashtag #MainBhiChowkidar. As expect, the Nirav Modi on Twitter received a personalised a personalised message. Without wasting any time, the parody account of Nirav Modi shared that tweet with his followers. Left red-faced, Modi quickly deleted the tweet. But the Twitter user, Nirav Modi, had saved the screenshot as she shared it later with a message, “Modi ji deleted the tweet. Sir main loan maaf pakka samjhu? #MainBhiChowkidar.”

Many users felt that Modi’s decision to launch #MainBhiChowkidar was an attempt to dilute the attack by Gandhi, who has often called him a thief by using #ChowkidarChorHai jibe. In 2014 Lok Sabha elections, Modi had used #ChaiPeCharcha campaigned after Congress leader Mani Shankar Aiyar mocked his much-claimed background as a tea-seller. But as, rightly argued by journalist Shabbir Ahmed, Modi’s new campaign lacks the much-needed vigour.

When Mani Shankar Iyer called #Modi a Chaiwala, the #BJP was quick to launch #ChaiPeCharcha campaign in 2014 & it worked well cos it was timely & then there was momentum

PM Modi is accused of siphoning off government money to help his businessman friends such as Anil Ambani (in Rafale deal), Nirav Modi and Mehul Choksi. Both Nirav Modi and Choksi had fled India last year after defrauding Indian banks for over 13,000 crores of rupees. Nirav Modi was recently tracked down in London by British newspaper The Telegraph, which reported that the billionaire businessman had started a news business in the English capital under a new name.