The Bengaluru’s Zomato delivery boy controversy has taken a fresh twist after Kamaraj broke his silence to narrate his side of the story. Contrary to the claims of physical assault made by Instagram influencer, Hitesha Chandranee, the Zomato delivery executive has said that the woman had injured herself with her finger ring. 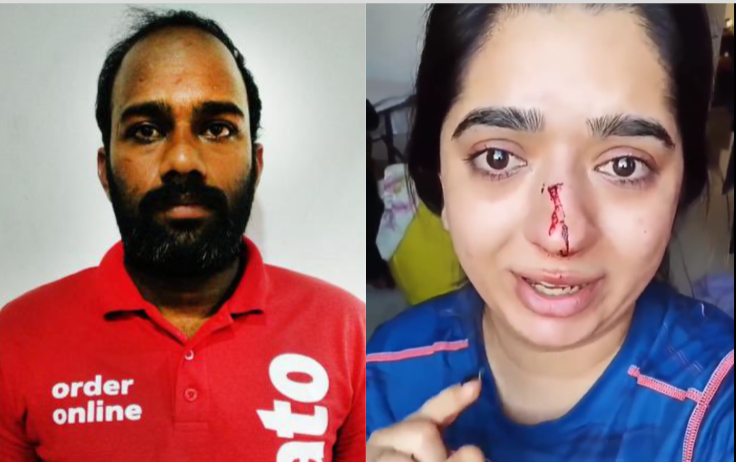 According to Kamaraj, he was indeed late by a few minutes and he apologised to the woman saying that he was stuck in traffic due to the civic works along the way. But, the woman was agitated and was in no mood to listen to his excuses, he added.

Instead, according to Kamaraj, the woman demanded to either cancel the order or not charge her for her food. A report by NDTV said that Kamaraj admitted picking up the food from her table and walking off after Zomato support staff informed him that the order had been cancelled.

“She started abusing me. There was a slipper stand near the door. She took chappals and started beating me,” Kamaraj said. He added, “I was totally shocked. For my safety, I hit her hand. She was wearing a ring. That ring hit her nose and then the injury happened. I didn’t punch her…I was totally scared, so I left the place.”

According to the Zomato delivery executive, he was chased by the woman, who kept on hitting him. He was later arrested and released on bail, prompting Zomato to suspend him. He now has bigger worries like arranging the money to pay towards his legal fees. “This is my full time job…,” he said trying to control his tears.

Chandranee had taken to Instagram to share a video of her bleeding nose as she accused Kamaraj of assaulting her. She was seen wearing a ring in the video. Even by her own admission, she had asked Kamaraj to either cancel the order or not charge her for her food.

No sooner did Kamaraj make his version public, public support began to pour in for the poor delivery agent.

Email sent to @zomato top management asking some pertinent questions. Making this public because m not sure if they’ll respond.

Yes its all his fault…
Why he didn’t bleed??
Why he didn’t upload video asking justice?
Why he didn’t use his gender… oops sorry ,he is male he can’t take advantage of it, coz its his fault that he is a man not women #zomatodeliveryboy #ISupportZomatoBoy @zomato @zomatoin pic.twitter.com/aJdq5qETKj

Woman can trend with bleeding nose.
Man spent 20 years behind the bars in fake rape case but no one is talking about it, why, because he is a MAN !#zomatodeliveryboy pic.twitter.com/RucoPcn2TT

Meanwhile, Zomato founder Deepinder Goyal has issued a statement saying that his company was taking care of the woman’s medical expenses and also Kamaraj’s loss of earnings.

I want to chime in about the incident that happened in Bengaluru a few days ago. @zomato pic.twitter.com/8mM9prpMsx

Goyal said that Kamaraj had made 5,000 deliveries during his time with Zomato and enjoyed a 4.74 star rating out of 5.