The news of former Congress leader, RPN Singh, joining the BJP ahead of assembly polls in Uttar Pradesh triggered speculations that his wife Sonia Singh too was likely to be fielded as a BJP candidate in the upcoming elections. Sonia Singh, who’s the editorial director of NDTV, has not reacted to intense social media speculations, but her husband finally reacted on Tuesday. 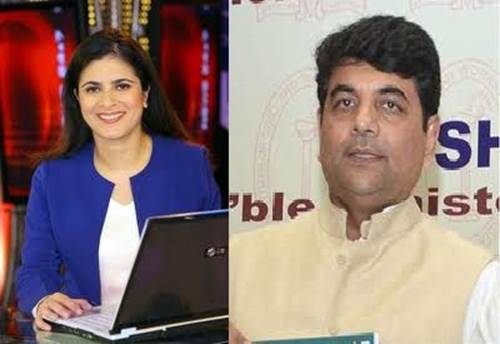 Speaking to ANI, Singh said, “I am the only one in politics. I will definitely do what the party asks me to.”

#WATCH | RPN Singh responds to speculations of his wife Sonia Singh and him contesting the #UttarPradeshElections2022; says, “I am the only one in politics. I will definitely do what the party asks me to.”

He quit the Congress party and joined BJP today. pic.twitter.com/ROTrPOyrkX

This was after Singh formally joined the BJP. He’s likely to be fielded as the BJP candidate against Swami Prasad Maurya, who was a key cabinet minister in the Yogi Adityanath government before leaving the Hindutva party to join the Samajwadi Party.

Speaking about his decision to join the BJP, Singh had thanked Prime Minister Narendra Modi, BJP President JP Nadda and Home Minister Amit Shah for embracing him in the BJP family. Addressing these leaders as ‘visionary,’ Singh said, “I was in a party for 32 years. But that party is no longer the same that I had started my political journey in. Neither does that party believe in the same ideology.”

Earlier, netizens had poked fun at both the NDTV and Sonia Singh immediately after it became clear that Singh was set to leave the Congress to join the BJP.