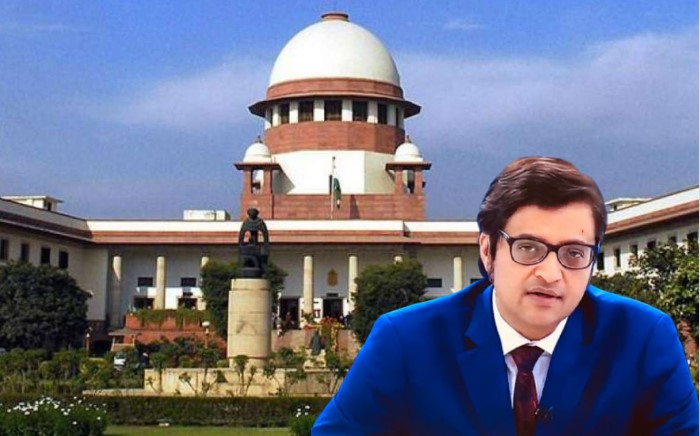 Terming her husband an ‘honest journalist,’ Goswami’s wife wrote, “My husband is an honest journalist of over 20 years. He has built India’s number 1 news network on the foundations of principles, integrity and accountability. While the questions he may ask might make some quarters uncomfortable, what is playing out today is an attempt to use a state machinery to browbeat, fix and frame a journalist and threaten his life.”

Her letter came hours after Dave raised serious questions on India’s top court’s integrity on extending preferential treatment to Republic TV founder Arnab Goswami. Dave had asked if the special treatment extended to Goswami was at the behest of Chief Justice of India SA Bobde.

Read the full letter of Goswami’s wife below

Subject: Malicious attempt by Shri Dushyant Dave, Senior Advocate to cause prejudice to the hearing of my husband Arnab Ranjan Goswami’s petition in the Hon’ble Supreme Court by his selective outrage.

I am shocked at the publicly circulated abhorrent letter by Senior Advocate Dushyant Dave to the Secretary General of the Supreme Court of India, implying that due process was not followed in the listing of the Special Leave Petition filed on behalf of my husband Arnab Goswami, who tonight spends his 7th night in custody which is clearly in breach of his fundamental and human rights.

My husband, a leading journalist of a national channel, was dragged, assaulted and then illegally arrested on 4th November 2020. He was paraded without footwear, and an attempt was made by the law & order machinery of the State of Maharashtra to rob him of his dignity. Two days ago, he was denied legal access and taken to Taloja Jail after a morning assault in custody. He publicly expressed, while being transported to Taloja Jail, that his life was in danger.

For over a month now, our newsroom, our editorial staff, our management and on-ground teams of Republic Media Network have borne the brunt of a vindictive campaign at the hands of the state machinery of Maharashtra. My husband, Arnab Goswami and the entire team at Republic has followed due process of law irrespective of the ongoing trampling of the free press and Emergency-like situation prevailing in the state of Maharashtra.

Today, when I read Shri Dave’s letter, I am shocked and horrified at the extent to which certain vested interests are at work. Neither do I know Shri Dave, nor have I ever met him. However, the selective targeting of my husband’s petition by Shri Dave shall have to be opposed by me, given his silence on other matters which were taken up by this Hon’ble Supreme Court in its wisdom with urgency in the past. Shri Dave’s silence in the following matters and his selective outrage in the present case is not only prejudicial to the cause of justice for my husband but is contemptuous as it tends to interfere with administration of justice.

In view of the aforesaid, I have a strong reason to believe that the letter referred to above is an attempt to sully the character of my husband by selectively targeting him and prejudice his case which is up for hearing in the Supreme Court tomorrow. I believe that there is an attempt to jeopardise the cause of justice in my husband’s petition and to cast a shadow on the hearing on the matter.

As terrifyingly, by making repulsive insinuations regarding the wielding of influence over the highest judicial officers of this country, I believe Shri Dave has attempted to tarnish the reputation, the integrity, and the independence of the great institution of judiciary and has also attempted to cause prejudice to the free and fair course of justice.

My husband is an honest journalist of over 20 years. He has built India’s number 1 news network on the foundations of principles, integrity and accountability. While the questions he may ask might make some quarters uncomfortable, what is playing out today is an attempt to use a state machinery to browbeat, fix and frame a journalist and threaten his life.

I am deeply disturbed that his life is under threat and that he has been in a jail meant for hardened criminals. I fear for his life and future as I appeal to the highest courts of this country to deliver him and us justice.

I look to you with great hope, and inextinguishable faith in the judiciary – as a wife seeking justice and as a citizen of this great country.