Mukesh Ambani’s News18 employee Aman Chopra has once again been caught peddling fake news, this time on the demolition of a 300-year-old temple in Rajasthan’s Alwar district. Enraged netizens have taken to Twitter to trend #ArrestAmanChopra, asking the state’s Congress government to punish the serial offender for using Mukesh Ambani’s TV channel to spread hate in society. 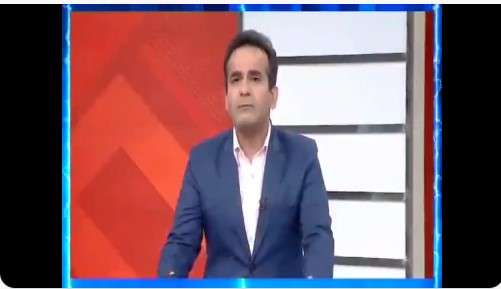 Reacting to the demolition of a 300-year-old temple in Alwar at the behest of the BJP-run civic body in the district, Chopra said that the move was designed to avenge the partial demolition of a mosque in Delhi’s Jahangirpuri area. He said on his TV channel, “The revenge of Jahangirpuri by attacking Mahadev. Please listen to me carefully what I am about to say.”

Chopra continued with his fake news as he sought to link the demolition of the temple in Alwar with the developments in Delhi’s Jahangirpuri. He said, “Is it such a big coincidence? Two days ago, a bulldozer was used on the premises of a mosque in Jahangirpuri and today three temples were demolished in Rajasthan’s Alwar. One temple was 300 years old. Was it to avenge Jahangirpuri?”

Chopra, through his hate speech, made desperate attempts to term the demolition of the temple in Alwar with the demolition drive of Muslim houses, shops and mosque in Delhi. He deliberately ignored the fact that the temple was brought down on the orders of the BJP-run municipality in Alwar.

“This was their (municipal council’s) decision. The state government had nothing to do with it. They never asked the government for any direction and they never got any direction from us,” Rajasthan Urban Development and Housing Department Minister Shanti Dhariwal was quoted as saying by NDTV.

By asking ‘who’s the Aurangzeb of Alwar’, Chopra also made a dangerous attempt at blaming the Muslim community for the demolition of the temple and promoting violence again them.

As expected, enraged Twitter users have taken to the social media asking the Rajasthan’s Congress government to immediately arrest Chopra. Many reminded how Gujarat’s Dalit MLA Jignesh Mevani was arrested by the Assam Police for merely tweeting against Prime Minister Narendra Modi.

If Assam Police can go to Gujarat to arrest Jignesh Mewani for a harmless tweet then why can’t Rajasthan Police go to Delhi and arrest Aman Chopra for spreading fake news to disrupt communal harmony? #ArrestAmanChopra

BJP municipal board did the demolition of Shiv Temple in Rajasthan.

Arrest Aman Chopra, who incited riots in the country through news channel#ArrestAmanChopra

Such was the desperation to cause possible riots in the area that Chopra did not bother to take note of the statement by BJP leader and Rajasthan Deputy Leader of Opposition Rajendra Rathore, who said that his party-run municipal body had indeed ordered the demolition of the temple. According to NDTV, Rathore said, “Yes, the municipal council gave the directions in 2013 and it again passed a resolution, but the government and the district administration identified the encroachments, so they were careless about it. They should have been careful when they saw a temple was involved. We want a judicial enquiry into this matter.”