A man in Uttar Pradesh was seen carrying the photos of Prime Minister Narendra Modi and Uttar Pradesh Chief Minister Yogi Adityanath in his garbage cart. Incensed by the humiliation, the government has terminated the contract of the man in question. 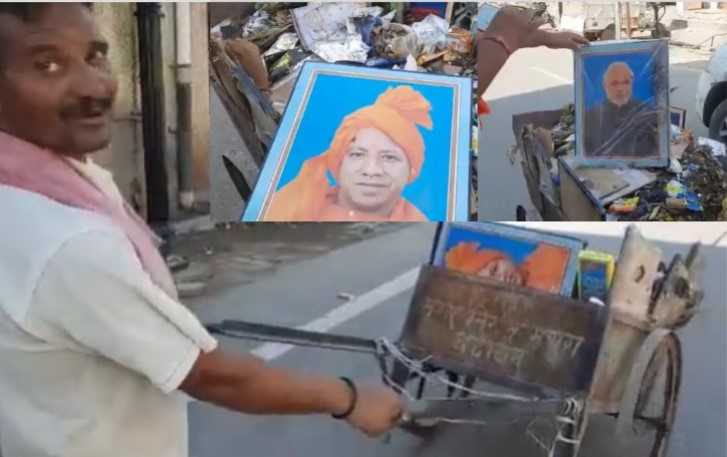 A local journalist had shared a series of videos that showed a contractual worker from the local civic body in Mathura Nagar Nigam carrying photos of Modi and Yogi by placing them in the garbage. When asked about the photos, the man said that he had found them lying in the garbage.

A contractual worker at UP’s Mathura Nagar Nigam was terminated after he was found carrying pictures of PM Narendra Modi and CM Yogi Adityanath among other dignitaries in his hand held garbage cart. pic.twitter.com/Jg2x3LW3Mk

Later, a concerned individual was seen taking the photos of Modi and Yogi out of the garbage cart to give them a good shower.

The pictures were spotted and drawn out of the garbage by a commuter from Alwar, Rajasthan. He got the pictures washed and took it away with him. pic.twitter.com/82wmcny8QZ

The man giving a shower to the photos of Modi and Yogi identified himself as one Amar Singh. An individual from Rajasthan took both the photos and took them in his car promising to immerse them with respect.