Malaika Arora and Arjun Kapoor have reportedly been dating each other for quite some time but neither of them has publicly confirmed their relationship status. However, Malaika appeared to have just confirmed that she is in a romantic relationship with Arjun Kapoor, brother of Anshula, Khushi and Janhvi Kapoor. She did so while judging the Sony TV’s dance reality show India’s Best Dancer, hosted by Bharti Singh of The Kapil Sharma Show along with her husband Haarsh Limbachiyaa. 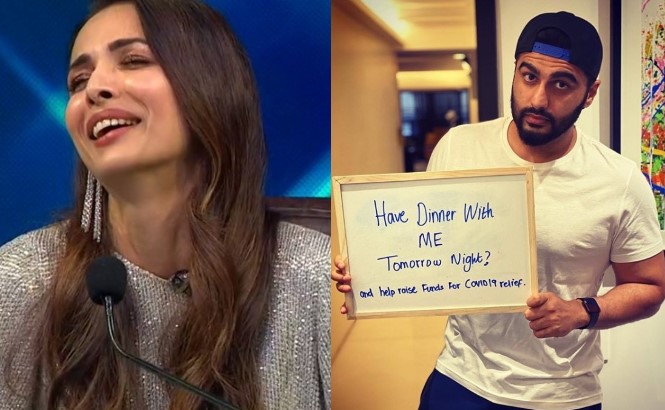 Malaika’s stunning confirmation about her relationship status came after a contestant left her speechless with his dance performance. While reacting to his performance, Malaika said that not only was she impressed with his dancing skills, but she had also fallen in love with his ‘hair style.’

This prompted her co-judge Terence Lewis asked, “You like mawaali (loafers) people, right?” Geeta Kapoor joined the conversation laughingly as she said, “Gunday (goons).” Malika turned towards Geeta and asked playfully, “Did you say something to me?”

Gunday is a popular Bollywood film starring Arjun Kapoor, Ranveer Singh, Priyanka Chopra and Irrfan Khan. The film was released in 2014 and went on to collect more than Rs 100 crore at the box office.

This is the first time Malaika has almost publicly confirmed that she was dating Arjun Kapoor. Both stars have often been spotted together in Mumbai until the nationwide lockdown to contain the spread of coronavirus kicked in. Since then all Bollywood stars have been indoors just like the rest of the Indians.

Last week, Malaika shared a photo of herself from inside her house, indicating that the lockdown had pushed her to the point of boredom. She wrote, “The thinker…. #rodin (wondering Wat to do next … can’t sit still ).” This had prompted Arjun to reply cheekily, “Thinking where to sleep next.”

The thinker…. #rodin (wondering Wat to do next … can’t sit still )#stayhomestaysafe

As expected, this too had elicited a quirky response from her rumoured boyfriend Arjun Kapoor, who pointed out that Malaika wasn’t taking a nap as she was seen smiling in the photo. “But ur smiling in ur nap also waah !!!,” Arjun had asked.

On the work front, Malaika is currently judging the Sony TV’s dance reality show India’s Best Dancer, which is hosted by Bharti Singh of The Kapil Sharma Show and her husband Haarsh Limbhachiyaa. As for Arjun, he will next be seen in Dibakar Banerjee’s Sandeep Aur Pinky Faraar.