Mukesh Ambani and Nita Ambani have always tried to protect the privacy of their children and their partners namely Akash Ambani, Shloka Mehta, Isha Ambani, Anand Piramal, Anant Ambani and Radhika Merchant. India’s richest businessman also kept his first grandson Prithvi away from Mumbai’s paparazzi ever since Akash and Shloka became proud parents in 2020. But, now leaked photos of Prithvi’s first birthday celebrations have gone viral on social media. In the viral photos, Shloka and Mukesh Ambani could be seen holding Prithvi while posing for the camera. 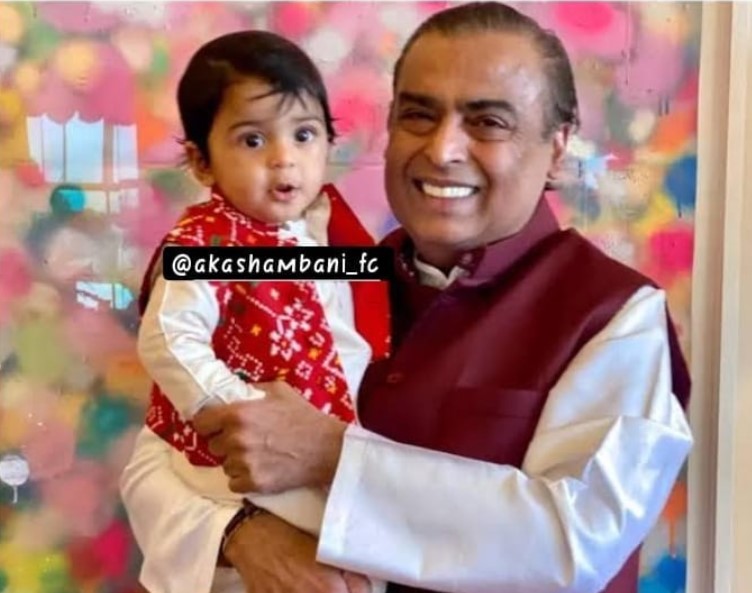 In one video, Mukesh Ambani could be seen playing with his grandson even as his mother Kokilaben looked at the camera. From the video, it was clear that the world’s third-richest man was in love with his first grandson. The video montage was shared by an account, claiming to be the fan group of Akash Ambani.

Prithvi Ambani was born on 10 December 2020. Immediately after his birth, grandfather Mukesh Ambani had wasted no time posing for a camera by holding Prithvi. This had prompted netizens to declare that baby Prithvi bore a resemblance with his grandfather.

The Ambanis had kept Shloka’s pregnancy under the wrap as she disappeared from the public glare all through the first wave of the nationwide lockdown in 2020. According to a media report, the second wave of the pandemic, which killed millions of Indians, prompted the Ambanis to consider shifting their base the United Kingdon. Though the Ambanis denied that there were any plans to permanently shift to the UK, they confirmed the report of purchasing an expensive villa in England.

A statement from Reliance Industries had said, “A recent report in a newspaper has led to unwarranted and baseless speculation in social media regarding the Ambani family’s plans to partly reside in Stoke Park, London. Reliance Industries Limited will like to clarify that the Chairman and his family have no plans whatsoever to relocate or reside in London or anywhere else in the world.”

Mukesh Ambani had recently revealed how the newest member of the Ambani family had affected his life. Speaking about Prithvi, Ambani had said, “Let me extend a warm welcome on behalf of my mother Kokilaben, Nita and me, Isha and Anand, Akash, and Shloka and Anant and Radhika and our dearest Prithvi. Prithvi is the newest member of our family. Over the last year, he has brought boundless joy to our lives. I am sure all parents and grandparents amongst you have experienced the same joy.”