Krushna Abhishek stunned his co-star Kapil by threatening to walk off The Kapil Sharma Show after seeing too many guests on the popular Sony TV comedy show. This was after Kapil played host tom popular dance choreographer Remo D’Souza, Salman Yusuff Khan, Punit Pathak and Dharmesh Yelande. This came days after Kapil took a dig at Archana Puran Singh for leaking the episodes of his comedy show on Instagram even before their broadcast. 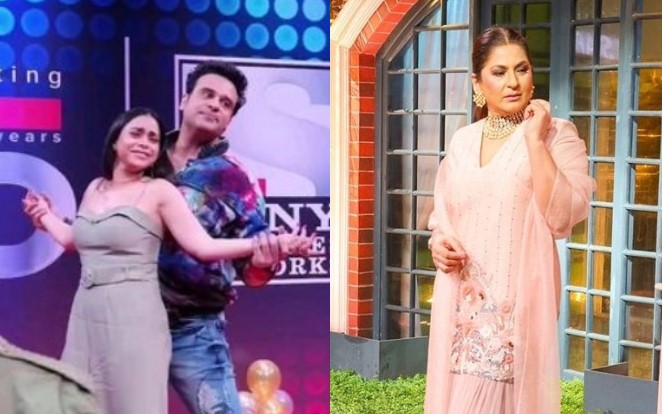 No sooner did Krushna make his appearance on the show, he said, “Bye Remo sir, Bye Dharmesh, Bye Salman.” This prompted Kapil to ask Krushna, “Oye, why are you waving goodbyes? Wouldn’t you talk to them?” Krushna replied, “Who invites so many guests on the show?”

A post shared by Sony Entertainment Television (@sonytvofficial) on Nov 6, 2020 at 12:02am PST

Of course, Krushna wasn’t serious in his threat to walk off the show. He continued to cause a laughter riot as he told Remo that he had authored a book on the choreographer titled Dance Ka Demo D’Souza Ka Remo. His witty reply left everyone in splits. When Kapil asked why he was angry with Remo, Krushna replied, “he discovered talents from around the country to make them stars, but someone lives in his own building (referring to himself)..” Even before he could complete his sentence, everyone on the show burst into laughter.

In another video, Archana Puran Singh was seen sharing banter with Kapil as the latter accused her of leaking the episodes of his show on Instagram before their broadcast.

BEHIND THE SCENES with team #thekapilsharmashow #throwback #laughter

This is not the only time Kapil and Krushna have targeted Archana by taking potshots at her Instagram videos that have become hugely popular. However, a great sport that Archana is, she has often taken these jibes in her stride.