Authorities in Uttar Pradesh’s Noida have sealed the entire building of Zee News TV channel after 10 more staff members tested positive for COVID-19. Earlier, 66 staff belonging to the controversial TV channel had reportedly tested positive for the deadly virus. As the news of Zee News channel building’s sealing spread, Twitterati declared the development an a sign of karma since the pro-BJP media platform had run a vicious campaign against India’s Muslims by falsely demonising them to be the spreader of the virus. 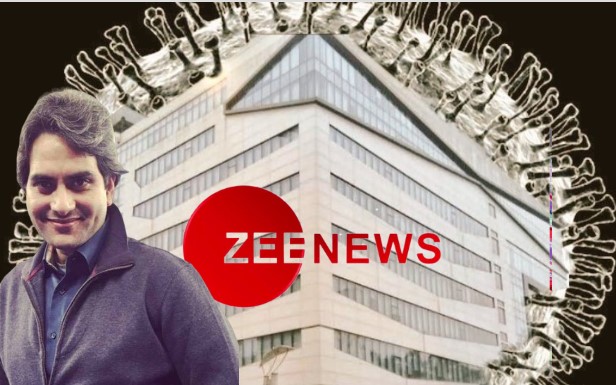 News agency PTI reported that 10 more employees of Zee Media tested positive for COVID-19 on Monday. Of them, nine are the residents of Noida, while one hails from Delhi.

“A total of 10 employees of a private company located at Sector 16a in Noida tested positive. All patients were in institutional quarantine. Nine patients belong to Gautam Buddh Nagar and one patient was cross notified to Delhi,” the agency quoted a district administration statement.

Meanwhile, the district administration has sealed the entire building of Zee Media in sector 16A, also known as Film City.

The new development prompted Twitterati to target Zee News reminding the TV channel’s editor Sudhir Chaudhary of how it ran a vicious campaign demanding the sealing of the Delhi’s Nizamuddin Markaz. Journalist Mazhar Farooqui wrote, “Karma is such a bitch. A few days ago Zee TV was calling for the sealing of the Markaz building. Today their own office was sealed. As my Naani says, what goes around comes around.”

It’s not clear if the channel’s editor, Sudhir Chaudhary, too has been tested for coronavirus. Chaudhary had been facing widespread condemnation for displaying alleged Islamophobia through his regular broadcasts on the Tablighi Jamaat.

Last week, Twitter had exploded in anger as Zee News confirmed that 28 of its staff members had tested positive for coronavirus. A journalist had claimed that Tablighi Jamaat-like discriminatory treatment was being meted out to staff working for Zee News by their own colleagues, who worked for WION, Zee Media’s English TV channel. This had prompted Chaudhary to imply that those testing positive for COVID-19 had shown the courage to come to office instead of sitting at home and creating memes.

Many have been demanding criminal action to be filed against Chaudhary for allegedly forcing his staff members to come to work despite being infected by coronavirus.