Kapil Sharma on Saturday night showed just how much he respected Archana Puran Singh when he told the guests of The Kapil Sharma Show that he would walk out of the comedy programme if they did not stop flirting with the veteran actress. This was when Kapil’s guests, three noted Bollywood lyricists, began to flirt with Archana by attempting to pen poetry for her. Of course, this was all in jest including Kapil’s threat to walk out of the show. 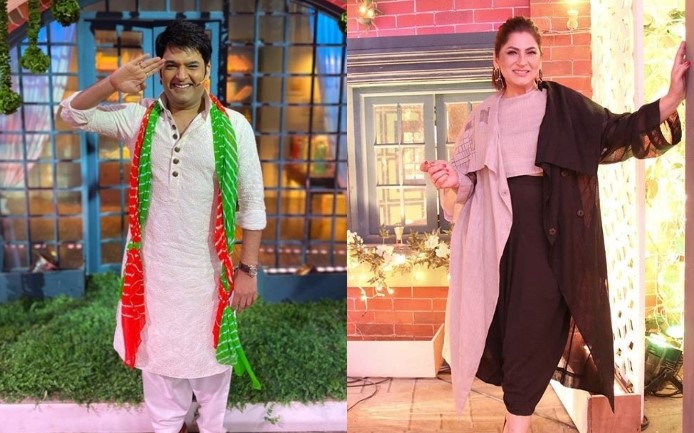 Kapil had asked one of his lyricist guests if he would prefer to write romantic poetry or ‘veer ras‘ for his show’s judge implying at Archana’s masculinity. Just when his guests began to interact with Archana, Kapil said, “You speak to each other, I will leave. I can say (to Archana) whatever I want, but I wouldn’t let anyone else flirt with my judge.”

He continued, “By the way, the man wearing PPE kit here is Parmeet Sethi (Archana’s husband).” This left everyone including Archana in splits.

Bharti Singh too targeted Archana with her joke as she told everyone how the veteran actress was the first woman, who was happy even after her marriage. This, according to Bharti, was because Archana had married a Punjabi unlike her, who was married to a Gujarati.

Bharti, who hails from Punjab, is married to Haarsh Limbachiyaa. Taking a dig at her husband, Bharti said that he could afford to travel without his passport but not a traditional Gujarati dish.

Kapil teased Archana by saying that she too had auditioned for a role in Baahubali. He told his guest Manoj Muntashir, who was the scriptwriter for the Hindi version of the film, “You know the beautiful lady Shivagami Devi, for her assistant Katappa’s role.”

Not to be left far behind, Kiku Sharda too targeted Archana as he told one of the lyricists, who had penned the song in Shahid Kapoor-starrer Batti Gul Meter Chalu, “Archana ji is also a big fan of your song from film Batti Gul Meter Chalu. She turned off someone’s light for her meter to start (on The Kapil Sharma Show).”

This was in reference to Archana replacing Navjot Singh Sidhu as the judge of The Kapil Sharma Show.

The three guests, who appeared on The Kapil Sharma Show were Manoj Muntashir, Amitabh Bhattacharya and Swanand Kirkire.