Actor Kangana Ranaut recently lost her cool after a reporter sought her reaction to the public shaming of Deepika Padukone by an influencer. An angry Kangana ordered the journalist to sit down. 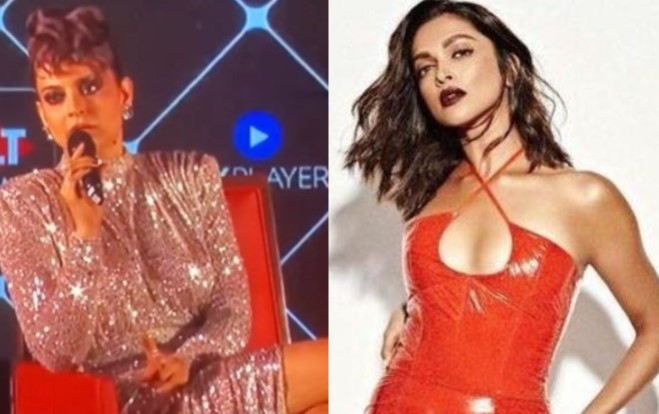 Kangana was speaking to journalists about her new show, Lock Upp, when a journalist asked the pro-BJP actor to comment about Deepika’s recent spat with an influencer on Instagram.

Kangana replied, “Look I am here to defend those, who can’t defend themselves. Alright! She can defend herself. She has the privilege, the platform and I can’t promote her film here. Sir down.”

Kangana also alleged that the journalist in question was a plant by Deepika’s PR to promote the latter’s film.

The reporter was referring to a sexist post by a social media influencer, who had written in his Instagram story taking potshots at Deepika’s choice of clothes to promote her film Gehraiyyan. He had written, “Newton’s Law of Bollywood. The clothes will get tinier as the Gehraiyyan release date approaches.” The influencer, followed by several Bollywood artists such as Anushka Sharma and Kareena Kapoor Khan, had mockingly written that  ‘necklines and hemlines are Gehraiyaan’ alluding that Deepika will resort to wearing skimpier clothes closer to the time of her film’s release.

Days later, Deepika updated her Insta story without naming the influencer. She wrote, “Scientists say the universe is made of protons, neutrons, and electrons. They forgot to mention morons.”

Gehraiyaan also features ‎Siddhant Chaturvedi, Shakun Batra and ‎Rajat Kapoor and is scheduled to be released on Amazon Prime Video on 11 February.

Deepika is married to actor Ranveer Singh, who has chosen to remain silent on the whole controversy.