Sushant Ssingh Rajput’s friend and filmmaker, Sandeep Ssingh, has sent a defamation notice to Arnab Goswami claiming Rs. 200 crore in compensation. Ssingh has claimed in his legal notice that Goswami’s colleagues resorted to extortion by sending messages with ‘criminal intent.’ Sharing the legal notice on his social media page, Ssingh said that this was a ‘payback time’ for Goswami and his TV channel. 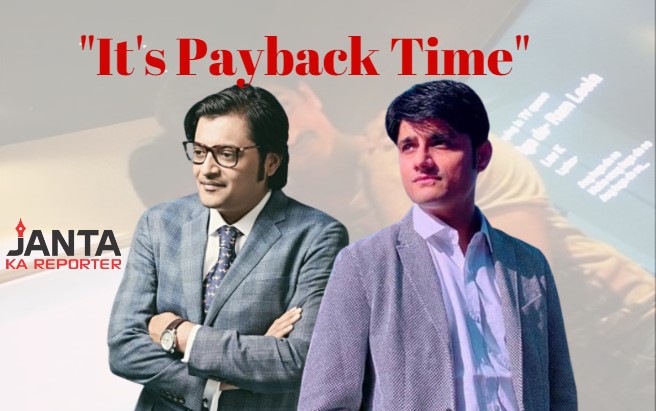 In his legal notice to Goswami, Ssingh alleged that Republic TV had indulged in attempts to malign his image by airing ‘malicious contents as part of propaganda’ with ‘sole motive to extort money and grab TRP.’

The legal notice read, “That there have been several instances which establish your fraudulent design and modus operandi of airing baseless news items.”

Ssingh sensationally alleged that some of Republic TV employees had threatened him to continue to ‘benefit financially’ their TV channel failing which Goswami ‘shall keep airing such news items which may affect’ him adversely. According to the legal notice, Republic TV employees also threaten to declare Ssingh a ‘murderer of Late Rajput.’

“And the said advise of your employee proved to be correct after you continued with slander news items for weeks to besmirch the image of my client,” read the legal notice sent to Goswami.

Ssingh has taken a dim view of Republic TV’s claims that he wanted to ‘run away to UK’ to escape the investigation into the death of Sushant Singh Rajput. He said that Republic TV employees tried to enter his residence and harassed ‘security guards’ and ‘domestic helpers’ between 22 August to 24 August, thereby defaming his image.

The notice, served through lawyer Rajesh Kumar of R&R Law Associates, said that both criminal and civil cases would be filed against Goswami if the latter failed to pay Rs 200 crore as compensation and tender an ‘unconditional apology’ with 15 days.

RIP @sushantsinghrajput Bhai, why did you do this

The defamation notice has come as a huge blow to Goswami, who’s facing a series of cases against him. Not too long ago, as many as 38 Bollywood production houses owned by Aamir Khan, Salman Khan, Shah Rukh Khan, Ajay Devgn and Karan Johar moved the Delhi High Court seeking to curb the irresponsible, derogatory and defamatory remarks being made against the film industry.

As for Sandeep Ssingh, he was the producer of the biopic on Prime Minister Narendra Modi, released during the last Lok Sabha elections in 2019.