Remember N Nageswara Rao, who was appointed as the interim head of India’s federal probe agency CBI in October 2018 by the Narendra Modi government? Rao, now a retired IPS officer, is facing widespread condemnation after he took to Twitter to communally-charged tweet to celebrate the death of noted social activist Swamy Agnivesh. The Indian Police Foundation has issued an extraordinary statement saying that Rao had ‘disgraced the police uniform.’ 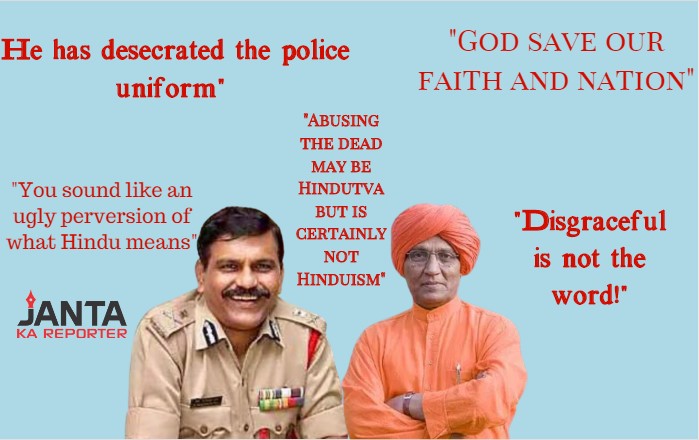 In his controversial tweet, Rao had written, “GOOD RIDDANCE @swamiagnivesh You were an Anti-Hindu donning saffron clothes. You did enormous damage to Hinduism. I am ashamed that you were born as a Telugu Brahmin. మేక వన్నె పులి गोमुख व्याग्रं Lion in sheep clothes My grievance against Yamaraj is why did he wait this long!”

His comments evoked large-scale condemnation from historians, activists and journalists with many terming them ‘disgraceful’ and disrespectful to the Hindu religion. However, Rao remained adamant stating that nowhere did Hinduism bar people from celebrating an individual’s death.

Shudder to think that this man served as IPS Officer and even worked as the acting Director of CBI, India’s federal probe agency. Disgraceful is not the word! https://t.co/sbwaT4FzY3

God save our faith and nation 🙁 ?
May Bhagwan Krishna save #Hindu & #Hindustan from #Hate Virus ? https://t.co/KKXnq0Fvna

You sound like an ugly perversion of what Hindu means and Hindu is; that said, your hatred may fetch you some reward

The tweet by this retired IPS officer goes against the very tenets of religion and basic humanity. To think that he was serving in the Govt and dealing with public with such thoughts at the back of his mind just a few days ago….

You are a disgrace. Can imagine what all you must have done as a police officer? Abusing the dead may be Hindutva but is certainly not Hinduism. Better late than never. Get yourself treated. https://t.co/Shh4zlmduc

The most scathing criticism came from the Indian Police Foundation, which wrote, “Tweeting such hate messages by a retired officer posing as an IPS officer – he has desecrated the police uniform which he wore and embarrassed the government. He demoralises the entire police force in the country, especially the young officers.”

Tweeting such hate messages by a retired officer posing as an IPS officer – he has desecrated the police uniform which he wore and embarrassed the government. He demoralises the entire police force in the country, especially the young officers. https://t.co/qOiI8D6dkO

Last year, the Supreme Court had held Rao guilty of contempt of court. Rao was sentenced to imprisonment till the rising of the court. This meant that Rao had to sit in a corner of the court till the end of the day. He was also fined Rs 1 lakh. The top court had come down heavily on Rao for the blatant violation of the Supreme Court order while transferring a key CBI officer investigating brutalities in Muzaffarpur shelter home.

Well-known social activist Swami Agnivesh passed away at a Delhi hospital on Friday. He was 80.