Insulted by Salman Khan, Himanshi Khurana aka Punjab’s Aishwarya Rai has triggered a huge wave of speculations on social media with many asking if she had got married to former Bigg Boss contestant Asim Riaz secretly. This was after Himanshi shared a photo of herself flaunting red chooda and mangal sutra. Both Asim and Himanshi have been dating each other since leaving the Bigg Boss house. 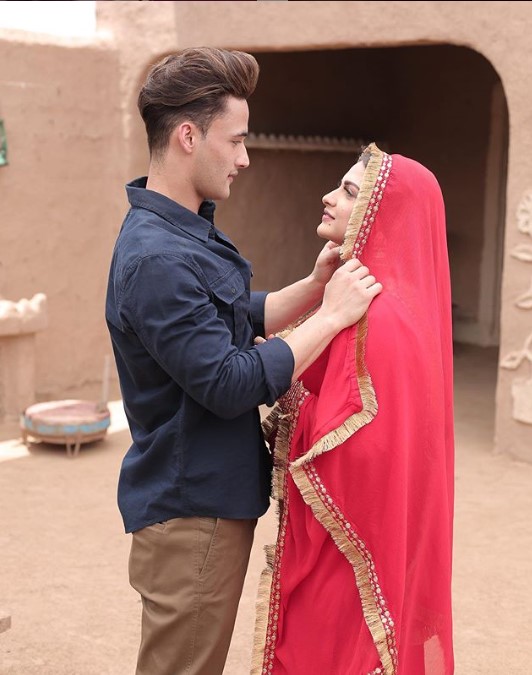 Although Himanshi’s photo did not carry a caption, but she was seen dressed in a striped shirt and blue jeans. With her gaze lowered, Himanshi was seen flaunting her red chooda and mangalsutra.

No sooner did she share her photo, her fans went into frenzy as one asked, “aapne shaadi kar li na (You got married right?) I know that.” Another asked, “Mam, you got married?” “Why are you wearing that mangal sutra on your wrist?” asked another fan.

It’s pretty common for new bride to wear choodas after getting married.

This comes just days after the couple’s second video Khyal Rakhya Kar was released. Soon after the Bigg Boss show ended, both Asim and Himanshi had recorded their first music together with Neha Kakkar lending her voice to the video album, Tu Kalla Sohna Nai.

Earlier this month, Himanshi had triggered speculations on her reported engagement with boyfriend Asim Riaz after she flaunted her diamond ring in a latest social media post. Himanshi, who has been dating Asim Riaz, had updated her Insta story with a photo of her what’s being described is her engagement ring.

While Asim hails from Jammu and Kashmir, Himanshi is a quintessentially Punjabi girl. She and Asim fell in love with each other after she entered the Bigg Boss house as a wildcard contestant. However, she could never earn Salman Khan’s confidence as the Bollywood megastar was seen insulting her on a number of occasions. Many felt that her claim of being Punjab’s Aishwarya Rai had not gone down well with the Dabangg actor. Salman and Aishwarya had reportedly dated each other before they relationship ended on a spectacular sour note.