The Centre’s Narendra Modi government on Thursday allowed pro-Hindutva TV channel Sudarshan TV to go ahead with its proposed Islamophobic broadcast on the ‘infiltration of Muslims’ in the civil services. The Delhi High Court had earlier blocked the TV channel from airing the controversial programme on 28 August. The single-judge Bench of Justice Navin Chawla had directed the Centre to decide on the matter and ‘place its decision before the court.’

The Information and Broadcasting ministry of the Modi government, in its order, said, “This is a peculiar situation where while the programme has not yet been telecast, the promo of the programme has been telecast on the channel, which formed the basis of the complaints received in the Ministry: accordingly the Ministry issued the notice to the channel to give its say regarding adherence by the channel to the Programme Code in respect of the proposed programme.” 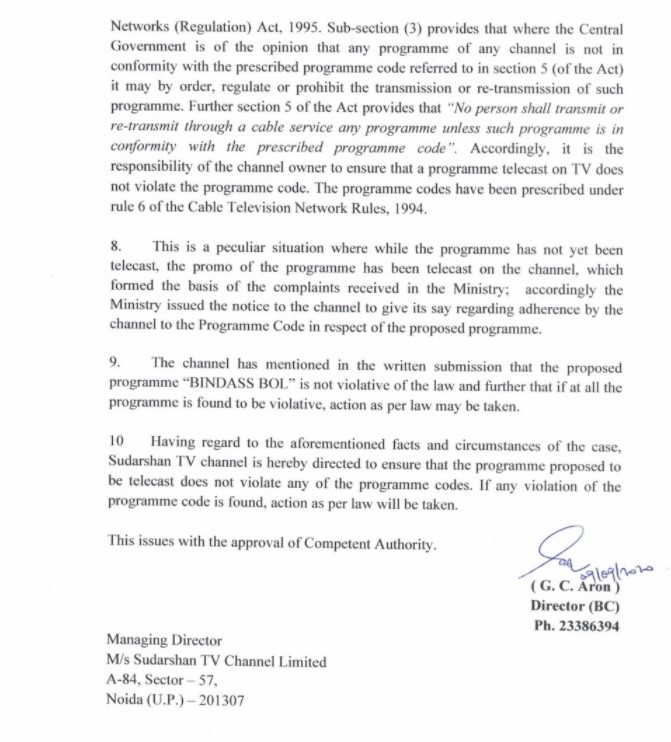 Last month the Delhi High Court in its order had said, “Having considered the submissions made, till the next date of hearing, the respondent nos.3 and 4 (Sudharshan TV and its Editor-in-Chief) are restrained from telecasting the programme titled ‘Bindas Bol’ scheduled to be telecast at 8.00 p.m. today. In the meantime, the respondent no. 1 (Centre) shall decide on the notice issued and place its decision before this court.”

Known for his bigotry, Chavhanke had earned widespread condemnation after he decided to broadcast a show alleging a conspiracy behind the growing success of Muslims in the civil services exams. While many police complaints were filed across the country against Chavhanke, a group of petitioners had moved the Delhi High Court seeking a ban on the broadcast, scheduled for 8 PM on 28 August.

A former woman employee of Sudarshan TV had accused Chavhanke of raping and molesting her besides indulging in criminal intimidation in 2016. He was later also arrested by the Uttar Pradesh Police for fanning communal tension in the state.