Indian Idol judges Neha Kakkar and Vishal Dadlani on Saturday night broke down in public as they struggled to control their emotions. Tears flowed on the sets of Sony TV’s singing reality show as contestants paid rich tributes to their mothers by singing gut-wrenching songs. 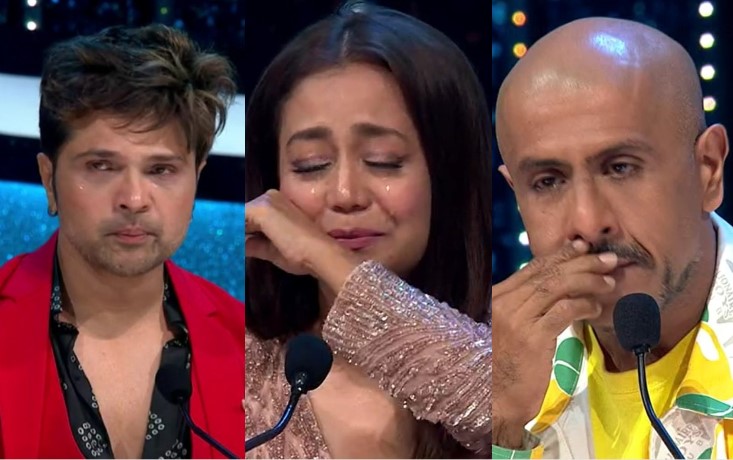 Host Aditya Narayan was the first to notice that Vishal’s eyes too had welled up on Danish’s performance. Vishal said, “I got a call from my Mom before the shoot of this episode. She asked, ‘son, how are you?’ I told her that I was busy with the shooting of the programme.”

Vishal struggled to complete his sentence as he shared his phone conversation with his mother. He said with a tinge of guilt, “We should leave everything when one’s mother calls. Give at least five minutes to your Mom”, he added.

Vishal’s story left even contestants and fellow judge Neha Kakkar in tears as they found it difficult to control their tears. Vishal continued, “We will be fortunate if we can become even a shadow of our mothers. We often forget that nothing is important in the world other than our mothers.”

The show also saw contestant Sawai Bhatt from Rajasthan reveal how his fellow contestants had pooled money to buy a new dress for his mother. Neha insisted that Sawai’s mother change into her new dress and return to the stage. The contestant’s mother did not disppoint the Indian Idol judge and soon made an appearance in her new outfit leaving everyone pleasantly surprised.

Vishal wasn’t the only judge to break down in public. Neha had earlier become incredibly emotional by the performance of contestant Anushka, who picked the Luka Chhipi track from Rang De Basanti to pay her tribute to her mother.

No sooner did Anushka complete her performance, a visibly emotional Neha said, “Anushka, I had told you that even I suffer from anxiety problems (during LIVE performances). It becomes very difficult.”

With Vishal and Neha in tears, the third judge of the show, Himesh Reshammiya, too was seen crying on several occasions.