India on Saturday annihilated England by inflicting a 36-run defeat on the visitors in the deciding T20 International match to lift the series 3-2. Skipper Virat Kohli was declared Player Of The Series for his consistent batting performance in the competition. Bhuvaneshwar Kumar, who has impressed everyone with his fast bowling in the series, was adjudged Player Of The Match after he conceded just 15 runs in four overs to scalp two wickets. 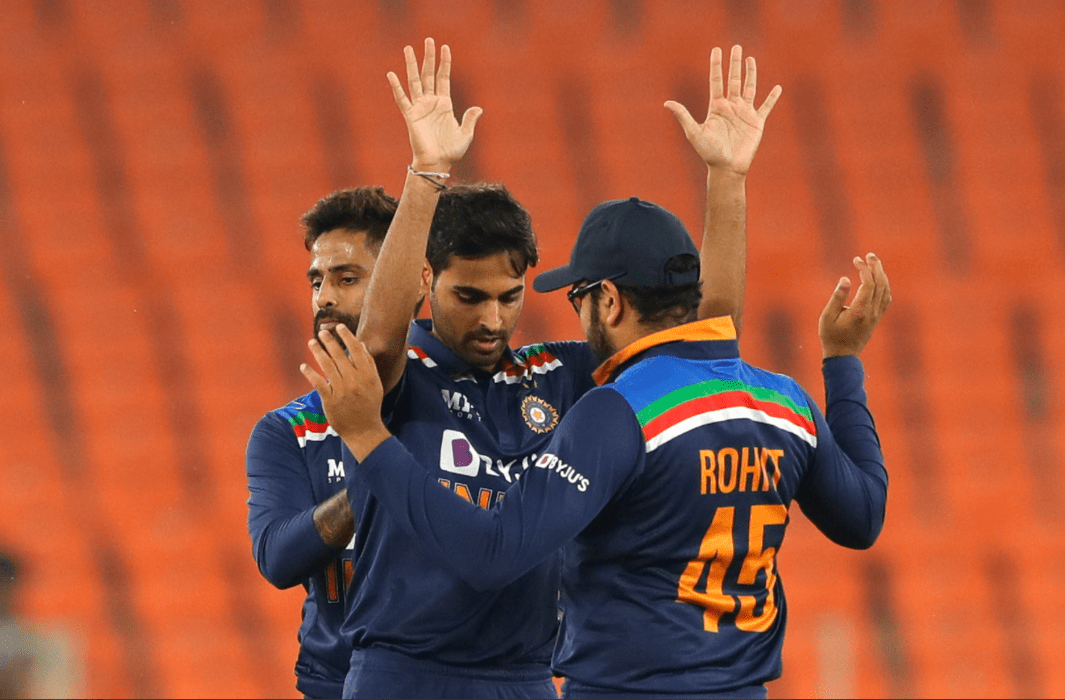 Batting first, India piled up a total of 224-2 in their quota of 20 overs. Virat Kohli, who opened the innings for India with Rohit Sharma, was the top-scorer with his unbeaten knock of 80 that he took just 52 balls to score. Sharma made quickfire 64 runs in just 34 balls as he added 94 runs with Kohli for the first wicket.

Hardik Pandya remained not out at 39 by facing just 17 balls, while Suryakumar Yadav made 32 runs in as many balls.

England’s run-chase was disastrous as they lost their in-form batsman Jason Roy when the team’s total was zero. Jos Buttler and Dawid Malan added some respectability to the English total as they began to hit Indian bowlers all around the Ahmedabad stadium. They added 130 runs in 12.5 overs and caused quite a scare in the Indian camp as England appeared destined to chase the total successfully.

However, Buttler’s departure at 52 triggered the batting collapse of England as the visitors found it impossible to recover and could only score 188-8 in 20 overs. Shardul Thakur took three wickets, but it was Kumar, who emerged as the best bowler with his 2-15 bowling figure.

Speaking after the match, Kohli said, “I think it was a complete game for us and we outplayed the opposition even with so much dew coming in. The fact that Rishabh and Shreyas didn’t even come to bat and that we got to 230 was a testimony to the batting performance. Good returns for us. We were positive in our intent and we wanted to take the game forward. Tonight it was classic Rohit Sharma and if plays more freely like that… Suryakumar and Hardik in the end – I enjoyed the partnerships. Yes, I’m going to open in the IPL as well.

“We do have a solid middle order now – it’s about the two best players getting maximum no of balls in T20 cricket. I’d like to parner Rohit at the top and the other guys feel confident when one of us are in. I’d like that to continue. The arrival of Kishan and Surya has pleased me also how Shreyas has batted in the first game and last game. Ishan was brilliant but I was particularly pleased with Surya. Hardik and Bhuvi coming back well. Nattu came back in and bowled two crucial overs today. Pant has shown maturity to bat in difficult situations and it has been a series of plusses for us. The confidence levels of Thakur after the Test series is sky-high – even with the bat. Proper, proper cricketer. I just found out we may play some T20 series after the Test.”

English skipper Eoin Morgan said, “I think the series facing a strong Indian team was fantastic… India outplayed us in the big moments of the game and deserved to win. As a general principle we bat deep – we try to take advantage of it – but couldn’t do so in big moments. In South Africa against South Africa, we chased 225. Huge plusses for us will be the powerplay bowling. Have to commend Adil Rashid for the new role with the new ball. That gives us the extra option. The top order really well in the two wins we did win.”